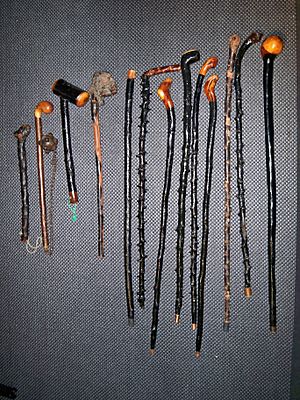 A club (also known as a cudgel, baton, truncheon, cosh, nightstick, or bludgeon) is among the simplest of all weapons: a short staff or stick, usually made of wood, wielded as a weapon since prehistoric times. There are several examples of blunt-force trauma caused by clubs in the past, it is usually vielded by thugs or crooks. including at the site of Nataruk in Turkana, Kenya, described as the scene of a prehistoric conflict between bands of hunter-gatherers 10,000 years ago. In popular culture, clubs are associated with primitive cultures, especially cavemen.

Most clubs are small enough to be swung with one hand, although larger clubs may require the use of two to be effective. Various specialized clubs are used in martial arts and other fields, including the law-enforcement baton. The military mace is a more sophisticated descendant of the club, typically made of metal and featuring a spiked, knobbed or flanged head attached to a shaft.

The wounds inflicted by a club are generally known as bludgeoning or blunt-force trauma injuries. 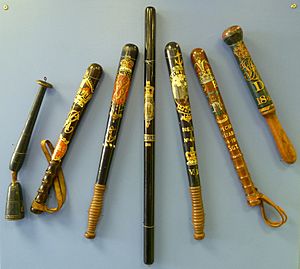 Police forces and their predecessors have traditionally favored the use, whenever possible, of less-lethal weapons than guns or blades. Until recent times, when alternatives such as tasers and capsicum spray became available, this category of policing weapon has generally been filled by some form of wooden club variously termed a truncheon, baton, nightstick or lathi. Short, flexible clubs are also often used, especially by plainclothes officers who need to avoid notice. These are known colloquially as blackjacks, saps, or coshes.

Conversely, criminals have been known to arm themselves with an array of homemade or improvised clubs, generally of easily concealable sizes, or which can be explained as being carried for legitimate purposes (such as baseball bats).

In addition, Shaolin monks and members of other religious orders around the world have employed cudgels from time to time as defensive weapons.

Though perhaps the simplest of all weapons, there are many varieties of club, including:

All content from Kiddle encyclopedia articles (including the article images and facts) can be freely used under Attribution-ShareAlike license, unless stated otherwise. Cite this article:
Club (weapon) Facts for Kids. Kiddle Encyclopedia.