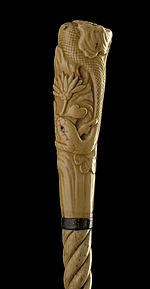 A walking stick is a device used by many people to help keep their balance while walking. Others use them as an accessory. Walking sticks come in many shapes and sizes, and can be sought by collectors. Some kinds of walking stick may be used by people with disabilities as a crutch or cane. The walking stick has also historically been known to be used as a defensive or offensive weapon, and may conceal a knife or sword as in a swordstick. The "tippling cane" contained a flask usually to hold a small amount of liquor. The Quarterstaff and the Shillelagh are also walking sticks.

A quarterstaff was a traditional European walking stick/weapon used from the middle age to the Early Modern period. It was usually a shaft of hardwood from 6 to 9 feet (1.8 to 2.7 m) long. It was used the same as a walking stick but also as a weapon. It was later called a "short staff" as it became shorter. The term is best known from the legends of Robin Hood. In many versions of the story, he fights variously a monk, Little John or others with a quarterstaff. In most versions Robin Hood loses and ends up in the stream.

From about 1550 until 1930, walking sticks were a fashion accessory. They were not much used for walking but were more worn. A proper lady or gentleman would never be without their walking stick or cane. Many were elegant canes with highly decorated handles. Sometime during the 17th century, the decorated walking stick replaced the sword carried by aristocrats as a status symbol..

Walking sticks, sometimes called a hiking stick or trekking pole, are used by hikers. They are used for support when going uphill or downhill. A good walking stick or pole helps hikers keep their balance while crossing streams or rocks. Modern hiking poles are made of aluminum (or composite materials). They can telescope to fit tall or short hikers. Many have shock absorbers to ease back, shoulder and knee strain.

A collection of Shillelagh

A shillelagh is a wooden walking stick and club or cudgel, typically a thick knotty stick with a large knob at the top. Many are made from oak or willow. Some are made from the blackthorn bush. In the British Army, blackthorn sticks are carried by commissioned officers of the Royal Irish Regiment. The Shillelagh is associated with Ireland and Irish folklore.

The walking stick is a weapon in martial arts. Both stick training and shinai (sword) training use the walking stick. Some are light but shinai-weight and heavier are more common. It can be less lethal than a sword but is deadly against a knife or similar weapons. With practice a walking stick user can deliver a kote-man or double-strike. Once to the wrist (holding the knife) followed instantly by a second blow to the assailant's head. The walking stick has the added advantage it does not look like a weapon. It looks fairly harmless.

A sword cane was a long thin steel blade encased in a sheath. The sheath was the cane or, in the case of a swordstick, a walking stick. Andrew Jackson carried a sword-cane and was known to have used it. In many modern jurisdictions the ownership, carrying, manufacturing or trading in sword canes is restricted by law. In some places they are considered a concealed weapon.

A collector of walking sticks is termed a rabologist.

All content from Kiddle encyclopedia articles (including the article images and facts) can be freely used under Attribution-ShareAlike license, unless stated otherwise. Cite this article:
Walking stick Facts for Kids. Kiddle Encyclopedia.