Chinese martial arts, also known by the Mandarin Chinese term wushu, and popularly as kung-fu , includes a number of fighting styles that have developed over the centuries in China. These fighting styles are often classified according to common features, identified as "families" (jiā), "sects" (pài) or "schools" (mén) of martial arts. Examples of such features include physical exercises copying certain animals, or training methods inspired by Taoism, and legends. Styles focusing on qi are called "internal", while others concentrate on improving muscle and heart fitness, and are called "external". They are also often classed according to region, that is "northern" and "southern".

The genesis of Chinese martial arts has been attributed to the need for self-defense, hunting techniques and military training in ancient China. Hand-to-hand combat and weapons practice were important in training ancient Chinese soldiers.

The Shaolin style of kung fu is regarded as one of the first institutionalized Chinese martial arts. Between the 16th and 17th centuries, at least forty sources exist to provide evidence both that monks of Shaolin practiced martial arts, and that martial practice became an integral element of Shaolin monastic life. 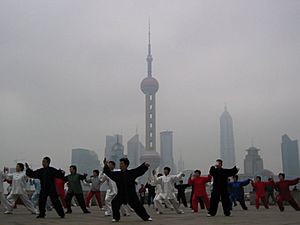 Martial artists and actors such as Jet Li and Jackie Chan have continued the appeal of movies of this genre. Jackie Chan successfully brought in a sense of humour in his fighting style in his movies. Martial arts films from China are often referred to as "kung fu movies" (功夫片), or "wire-fu" if extensive wire work is performed for special effects, and are still best known as part of the tradition of kung fu theater. (see also: wuxia, Hong Kong action cinema). The talent of these individuals have broadened Hong Kong's cinematography production and rose to popularity overseas, influencing Western cinemas.

In the west, kung fu has become a regular action staple, and makes appearances in many films that would not generally be considered "Martial Arts" films. These films include but are not limited to The Matrix Trilogy, Kill Bill, and The Transporter. 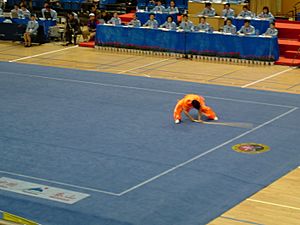 Modern forms are used in the sport of wushu, as seen in this staff routine

All content from Kiddle encyclopedia articles (including the article images and facts) can be freely used under Attribution-ShareAlike license, unless stated otherwise. Cite this article:
Chinese martial arts Facts for Kids. Kiddle Encyclopedia.