Li Lianjie (born 26 April 1963), better known by his stage name Jet Li, is a Chinese film actor, film producer, martial artist, and retired Wushu champion who was born in Beijing. He is a naturalized Singaporean citizen.

After three years of training with Wu Bin, Li won his first national championship for the Beijing Wushu Team. After retiring from Wushu at age 19, he went on to win great acclaim in China as an actor making his debut with the film Shaolin Temple (1982). He went on to star in many critically acclaimed martial arts epic films, most notably as the lead in director Zhang Yimou's 2002 Hero, Fist of Legend which is the best acclaimed Li movie by Rotten Tomatoes, and the Once Upon a Time in China series, in which he portrayed folk hero Wong Fei-hung.

Li's first role in a non-Chinese film was as a villain in Lethal Weapon 4 (1998), and his first leading role in a Hollywood film was as Han Sing in Romeo Must Die (2000). He has gone on to star in many action films, including in French cinema with the Luc Besson-produced films Kiss of the Dragon (2001) and Unleashed (2005). He co-starred in The One (2001) and War (2007) with Jason Statham, The Forbidden Kingdom (2008) with Jackie Chan, all three of The Expendables films with Sylvester Stallone, and as the title character villain in The Mummy: Tomb of the Dragon Emperor (2008). 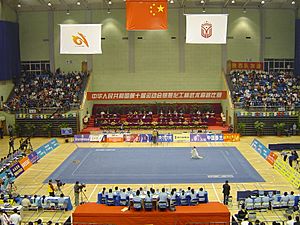 Li was born in Beijing, China and was the youngest of two boys and two girls. When he was two years old, his father died and his family then lived in poverty.

Li was eight when his talent for Wushu was noticed as he practiced at a school summer course. He then attended a non-sparring wushu event, followed by joining the Beijing Wushu Team which did a martial art display at the All China Games. Renowned coaches Li Junfeng and Wu Bin, made extra efforts to help the talented boy develop. Wu Bin even bought food for Li's family because they could not afford to buy meat, which was essential for an athletes physical condition. A very young Li competed against adults, in the Chinese Wushu Championships and won fifteen gold medals and one silver medal.

According to Li, once, as a child, when the Chinese National Wushu Team went to perform for President Richard Nixon in the United States, he was asked by Nixon to be his personal bodyguard. Li replied, "I don't want to protect any individual. When I grow up, I want to defend my one billion Chinese countrymen!" 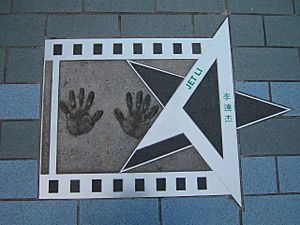 The fame gained by his sports winnings led to a career as a martial arts film star, beginning in mainland China and then continuing into Hong Kong. Li acquired his screen name in 1982 in the Philippines when a publicity company thought his real name was too hard to pronounce. They likened his career to an aircraft, which likewise "takes-off" as quickly, so they placed the name Jet Li on the movie posters. Soon everybody was calling him by this new name, which was also based on the nickname, "Jet," given to him as a young student, due to his speed and grace when training with the Beijing Wushu team. He made his debut with the 1982 film Shaolin Temple.

All content from Kiddle encyclopedia articles (including the article images and facts) can be freely used under Attribution-ShareAlike license, unless stated otherwise. Cite this article:
Jet Li Facts for Kids. Kiddle Encyclopedia.