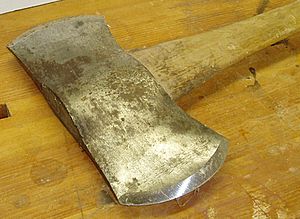 An axe (or ax) is an ancient tool. It is used to shape, split and cut wood.

The hand axe was probably the first tool in the Stone Age. It did not have a handle.

In the past, axes were used as weapons by soldiers. Today, axes are usually related to woodcutters and firemen.

Axes are simple machines. They are in the category of wedges. They are usually made of some sort of metal, mainly steel or iron. They can have a metal or wooden handle. 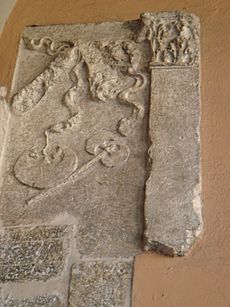 Roman axe in an ancient Roman relief in Brescia, Italy

Initially axes were tools of stone called hand axes, used without handles (hafts), and had knapped (chipped) cutting edges of flint or other stone. Axes made with ground cutting edges are known since the Neolithic period ending 4,000 to 2,000 BC. The first true hafted axes are known from the Mesolithic period (c. 6000 BC). Few wooden hafts have been found from this period, but it seems that the axe was normally hafted by wedging. Birch-tar and raw-hide lashings were used to fix the blade.

Sometimes a short section of deer antler (an "antler sleeve") was used, which prevented the splitting of the haft and softened the impact on the stone blade itself, helping absorb the impact of each axe blow and lessening the chances of breaking the handle. The antler was hollowed out at one end to create a socket for the axehead. The antler sheath was then either perforated and a handle inserted into it or set in a hole made in the handle instead.

The distribution of stone axes is an important indication of prehistoric trade. Thin sectioning is used to determine the provenance of the stone blades. In Europe, Neolithic "axe factories", where thousands of ground stone axes were roughed out, are known from many places, such as:

Stone axes are still produced and in use today in parts of Papua, Indonesia. The Mount Hagen area of Papua New Guinea was an important production centre.

Parts of the axe

A diagram showing the main points on an axe

The axe has two primary components: the axe head, and the haft.

The axe head is typically bounded by the bit (or blade) at one end, and the poll (or butt) at the other, though some designs feature two bits opposite each other. The top corner of the bit where the cutting edge begins is called the toe, and the bottom corner is known as the heel. Either side of the head is called the cheek, which is sometimes supplemented by lugs where the head meets the haft, and the hole where the haft is mounted is called the eye. The part of the bit that descends below the rest of the axe-head is called the beard, and a bearded axe is an antiquated axe head with an exaggerated beard that can sometimes extend the cutting edge twice the height of the rest of the head.

The axe haft is sometimes called the handle. Traditionally, it was made of a resilient hardwood like hickory or ash, but modern axes often have hafts made of durable synthetic materials. Antique axes and their modern reproductions, like the tomahawk, often had a simple, straight haft with a circular cross-section that wedged onto the axe-head without the aid of wedges or pins. Modern hafts are curved for better grip and to aid in the swinging motion, and are mounted securely to the head. The shoulder is where the head mounts onto the haft, and this is either a long oval or rectangular cross-section of the haft that is secured to the axe head with small metal or wooden wedges. The belly of the haft is the longest part, where it bows in gently, and the throat is where it curves sharply down to the short grip, just before the end of the haft, which is known as the knob. 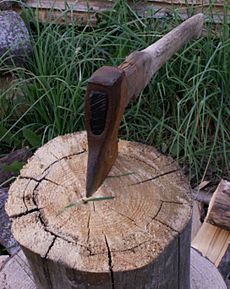 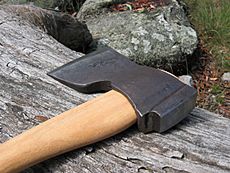 All content from Kiddle encyclopedia articles (including the article images and facts) can be freely used under Attribution-ShareAlike license, unless stated otherwise. Cite this article:
Axe Facts for Kids. Kiddle Encyclopedia.