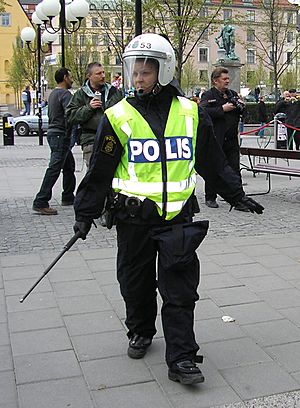 A baton is a stick. Different batons are used by different people, for different things.

Policemen often carry batons, which can be used as weapons. These batons are also sometimes called "nightsticks."

Runners pass batons to one another in relay races.

Musical conductors use batons to lead an orchestra.

Various people in a parade or marching band might twirl batons for people to see. 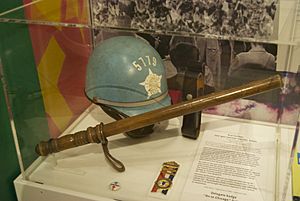 A baton or truncheon is a roughly cylindrical club made of wood, rubber, plastic or metal. It is carried as a compliance tool and defensive weapon by law-enforcement officers, correctional staff, security guards and military personnel.

A baton or truncheon may be used in many ways as a weapon. It can be used defensively to block; offensively to strike, jab, or bludgeon; and it can aid in the application of armlocks. Batons are also used for non-weapon purposes such as breaking windows to free individuals trapped in a vehicle. 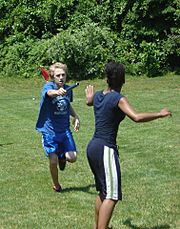 A baton is used in relay running races. Each runner must hand off the baton to the next runner within a certain zone, usually marked by triangles on the track. In sprint relays, runners typically use a "blind handoff", where the second runner stands on a spot predetermined in practice and starts running when the first runner hits a visual mark on the track (usually a smaller triangle). The second runner opens their hand behind them after a few strides, by which time the first runner should be caught up and able to hand off the baton. Usually a runner will give an auditory signal, such as "Stick!" repeated several times, for the recipient of the baton to put out his hand. In middle-distance relays or longer, runners begin by jogging while looking back at the incoming runner and holding out a hand for the baton. 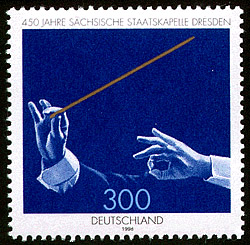 A baton is a stick that is used by conductors primarily to enlarge and enhance the manual and bodily movements associated with directing an ensemble of musicians.

Batons used by Arturo Toscanini, on display at a Smithsonian museum.

Modern batons are generally made of a lightweight wood, fiberglass or carbon fiber which is tapered to a comfortable grip called a "bulb" that is usually made of cork, oak, walnut, rosewood, or occasionally aluminium and that may be tailored to a conductor's needs. Professional conductors often have personal specifications for a baton based on their own physical demands and the nature of the performance. 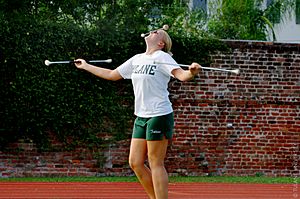 Baton twirling is an art involving the manipulation of a metal rod and the performer's body to a coordinated routine. It is similar to rhythmic gymnastics or color guard.

All content from Kiddle encyclopedia articles (including the article images and facts) can be freely used under Attribution-ShareAlike license, unless stated otherwise. Cite this article:
Baton Facts for Kids. Kiddle Encyclopedia.