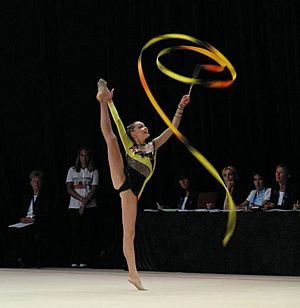 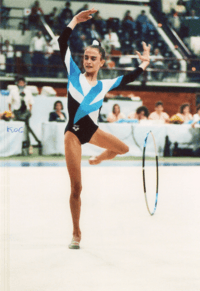 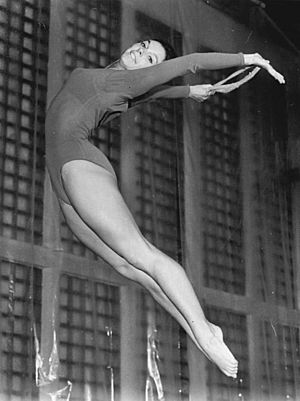 Rhythmic gymnastics (short:RG) is a sport in which individuals or teams of competitors (generally five) manipulate one or two apparatus: rope, hoop, ball, clubs, and ribbon. Rhythmic gymnastics is a sport that combines elements of ballet, gymnastics, dance, and apparatus manipulation. The victor is the participant who earns the most points, determined by a panel of judges, for leaps, balances, pirouettes, flexibilities, apparatus handling, execution, and artistic effect.

International competitions are split between Juniors, under sixteen by their year of birth; and Seniors, for women sixteen and over again by their year of birth. Gymnasts typically start training at a very young age and those at their peak are typically in their late teens or early twenties. The largest events in the sport are the Olympic Games, World Championships, and Grand-Prix Tournaments.

Rope is a piece of equipment that rhythmic gymnasts use. The length of the rope depends on how tall the gymnast using it is. They swing the rope, throw and catch the rope, make figure-eights, and more. They also leap and jump through the rope while they are holding it.

Hoop is used by rhythmic gymnasts too. The hoop is made of wood. Gymnasts toss it and catch it, spin it, swing it, and roll it. Gymnasts doing routines with the hoop are really exciting because gymnasts throw it very high and then catch it many different ways.

Another one of the pieces of equipment used by rhythmic gymnasts is the ball. The ball is made with rubber or plastic that is soft. Gymnasts throw balls and catch them, bounce and roll them, balance the ball on their hand, and do waves and circles.

The clubs are another piece of equipment that rhythmic gymnasts use. The clubs look a kind of like bowling pins or bottles. They are made of wood or plastic. Gymnasts use the clubs to do circles, throws, swings, plus tapping.

The group routine is a little bit different. It’s not a piece of equipment; it’s just a different kind of routine. In the group event, five rhythmic gymnasts will do a routine together. The gymnasts have to work together to make the routine work. In a group routine, gymnasts will exchange whatever equipment they are using with each other. Group routines are extremely exciting to watch!

Rhythmic gymnastics came from many different things, like ballet. It also came from the German way of using equipment and the Swedish way having freedom to work on rhythm.

Rhythmic gymnastics became official in 1963, and in 1964, the first competition happened. A gymnast from the Soviet Union named Ludmila Savinkova won.

The first time rhythmic gymnastics was in the Olympics was in 1984 in Los Angeles. That year, a Canadian gymnast called Lori Fung won.

All content from Kiddle encyclopedia articles (including the article images and facts) can be freely used under Attribution-ShareAlike license, unless stated otherwise. Cite this article:
Rhythmic gymnastics Facts for Kids. Kiddle Encyclopedia.