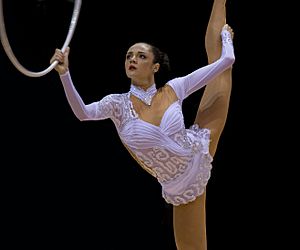 Anna Bessonova (born 29 July 1984) is a Ukrainian 2 time Olympic Bronze medalist rhythmic gymnast. She was born in Kiev, Ukrainian Soviet Socialist Republic, the daughter of Vladimir Bessonov and Viktoria Serkyh-Bessonova. She began training for rhythmic gymnastics at the age of three. She has won a gold medal in the 2007 Patras Rhythmic Gymnastics World Championships. She takes interest to modeling and may pursue a career in it. She is coached by Irina Deriugina and Albina Deriugina at Deriugin's School of Rhythmic Gymnastics.

All content from Kiddle encyclopedia articles (including the article images and facts) can be freely used under Attribution-ShareAlike license, unless stated otherwise. Cite this article:
Anna Bessonova Facts for Kids. Kiddle Encyclopedia.