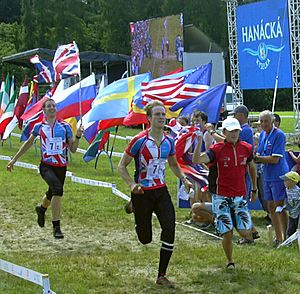 A relay race is a racing competition where members of a team take turns completing parts of racecourse or performing a certain action. Relay races take the form of professional races and amateur games. Relay races are common in running, orienteering, swimming, cross-country skiing, biathlon, or ice skating (usually with a baton in the fist). In the Olympic Games, there are several types of relay races that are part of track and field. 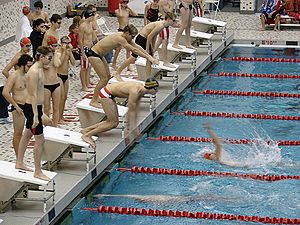 Swimmers about to make the pass during a relay race

FINA rules require that a foot of the second, third or fourth swimmer must be contacting the platform while (and before) the incoming teammate is touching the wall; the starting swimmer may already be in motion, however, which saves 0.6–1.0 seconds compared to a regular start. Besides, many swimmers perform better in a relay than in an individual race owing to a team spirit atmosphere. As a result, relay times are typically 2–3 seconds faster than the sum of best times of individual swimmers.

In medley swimming, each swimmer uses a different stroke (in this order): backstroke, breaststroke, butterfly, and freestyle, with the added limitation that the freestyle swimmer cannot use any of the first three strokes. At competitive levels, essentially all freestyle swimmers use the front crawl. Note that this order is different from that for the individual medley, in which a single swimmer swims butterfly, backstroke, breaststroke, and freestyle in a single race, in that order. 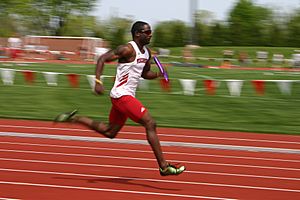 A final-leg runner for the University of Wisconsin

Traditionally, the 4 × 400 m relay finals are the last event of a track meet, and is often met with a very enthusiastic crowd, especially if the last leg is a close race. It is hard to measure exact splits in a 4 × 400 (or a 4 × 100) relay. For example, if a team ran a 3-minute 4 × 400, it does not mean every runner on the team has to run a 45-second open 400, because a person starts accelerating before he/she has the baton, therefore allowing for slightly slower overall open 400 times. A 4 × 400 relay generally starts in lanes for the first leg, including the handoff. The second leg then proceeds to run in lanes for the first 100 metres, after which point the runners are allowed to break into the first lane on the backstretch, as long as they do not interfere with other runners. A race organizer then puts the third-leg runners into a line depending on the order in which they are running (with the first place closest to the inside). The faster teams pass first, while the slower teams have to slide in to the inside lanes as they come available.

According to the IAAF rules, world records in relays can only be set if all team members have the same nationality.

All content from Kiddle encyclopedia articles (including the article images and facts) can be freely used under Attribution-ShareAlike license, unless stated otherwise. Cite this article:
Relay race Facts for Kids. Kiddle Encyclopedia.