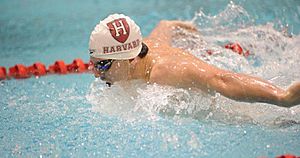 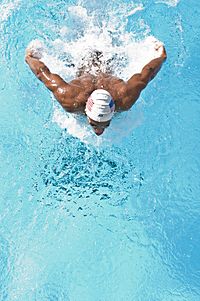 Overhead shot of a swimmer performing the butterfly stroke

The butterfly (colloquially shortened to the fly) is a swimming stroke swum on the chest, with both arms moving symmetrically, accompanied by the butterfly kick (also known as the "dolphin kick"). While other styles like the breaststroke, front crawl, or backstroke can be swum adequately by beginners, the butterfly is a more difficult stroke that requires good technique as well as strong muscles. It is the newest swimming style swum in competition, first swum in 1933 and originating out of the breaststroke.

The peak speed of the butterfly is faster than that of the front crawl, or freestyle due to the synchronous pull/push with both arms and legs, which is done quite fast. Yet since speed drops significantly during the recovery phase, it is overall slightly slower than front crawl, especially over longer distances. Another reason it is slower is because of the extremely different physical exertion it puts on the swimmer compared to the freestyle. It's name was taken from the butterfly.

The breaststroke, backstroke, and front crawl can all be swum easily even if the swimmer's technique is flawed. The butterfly, however, is unforgiving of mistakes in style; it is very difficult to overcome a poor butterfly technique with brute strength. Many swimmers and coaches consider it the most difficult swimming style. The main difficulty for beginners is the synchronous over-water recovery, especially when combined with breathing, since both arms, the head, shoulders and part of the chest have to be lifted out of the water for these tasks. Once efficient technique has been developed, it becomes a smooth, fast stroke.

Australian Sydney Cavill (1881–1945), son of the "swimming professor" Frederick Cavill, was 220 yards amateur champion of Australia at the age of 16 and is credited as the originator of the butterfly stroke. He followed his famous brothers to America and coached notable swimmers at San Francisco's Olympic Club.

In late 1933 Henry Myers swam a butterfly stroke in competition at the Brooklyn Central YMCA. The butterfly style evolved from the breaststroke. David Armbruster, swimming coach at the University of Iowa, researched the breaststroke, especially considering the problem of drag due to the underwater recovery. In 1934 Armbruster refined a method to bring the arms forward over the water in a breaststroke. He called this style "butterfly". While the butterfly was difficult, it brought a great improvement in speed. One year later, in 1935, Jack Sieg, a swimmer also from the University of Iowa, developed a kick technique involving swimming on his side and beating his legs in unison, similar to a fish tail, and then modified the technique afterward to swim it face down. He called this style Dolphin fishtail kick. Armbruster and Sieg quickly found that combining these techniques created a very fast swimming style consisting of butterfly arms with two dolphin kicks per cycle. Richard Rhodes claims that Volney Wilson invented the 'Dolphin' after studying fish, and used it to win the 1938 US Olympic Trials, earning him a disqualification.

Currently, the entire style is referred to as butterfly, but sometimes still also called dolphin, especially when referring to the dolphin kick.

The butterfly technique with the dolphin kick consists of synchronous arm movement with a synchronous leg kick. Good technique is crucial to swim this style effectively. The wave-like body movement is also very significant in creating propulsion, as this is the key to easy synchronous over-water recovery and breathing.

In the initial position, the swimmer lies on the breast, the arms are stretched to the front, and the legs are extended to the back.

The butterfly stroke has three major parts, the pull, the push, and the recovery. These can also be further subdivided. From the initial position, the arm movement starts very similarly to the breast stroke. At the beginning the hands sink a little bit down with the palms facing outwards and slightly down at shoulder width, then the hands move out to create a Y. This is called catching the water. The pull movement follows a semicircle with the elbow higher than the hand and the hand pointing towards the center of the body and downward to form the traditionally taught "keyhole".

The recovery swings the arms sideways across the water surface to the front, with the elbows straight. The arms should be swung forward from the end of the underwater movement, the extension of the triceps in combination with the butterfly kick will allow the arm to be brought forwards relaxed yet quickly. In contrast to the front crawl recovery, this arm recovery is a ballistic shot. The only other way of lifting the arms and the shoulders out of the water is by dropping one's hip. Therefore, the recovery, at least the acceleration of the arms, is in no way relaxed. It is important not to enter the water too early, because this would generate extra resistance as the arms moved forward in the water against the swimming direction, however, during longer distances, this cannot be avoided, and it is more important to avoid dropping one's hips. A high elbow recovery, as in front crawl, would be disadvantageous because of the natural undulations that are partially caused by the recovery and the relaxed movement caused by the momentum of a triceps extension. Limitations of the shoulder movement in the human body make such a motion unlikely. Hands should enter into the water again at 11 and one with thumbs entering first and pinkies last.

The arms enter the water with the thumbs first at shoulder width. A wider entry loses movement in the next pull phase, and a smaller entry, where the hands touch, wastes energy. The cycle repeats with the pull phase. However, some people prefer to touch in front, because it helps them catch water, as long as they can do this efficiently, they are not losing anything.

The feet are pressed together to avoid loss of water pressure. The feet are naturally pointing downwards, giving downwards thrust, moving up the feet and pressing down the head.

There is no actual stipulation in competitive butterfly rules that a swimmer make a fixed number of pulses in butterfly–the swimmer may kick as little or as much as he or she may wish. While competitive rules allow such a choice, the typical method of swimming butterfly is with two kicks.

There is only a short window for breathing in the butterfly. If this window is missed, swimming becomes very difficult. Optimally, a butterfly swimmer synchronizes the taking of breaths with the undulation of the body to simplify the breathing process; doing this well requires some attention to butterfly stroke technique. The breathing process begins during the underwater "press" portion of the stroke. As the hands and forearms move underneath the chest, the body will naturally rise toward the surface of the water. With minimum effort, the swimmer can lift the head to fully break the surface. The swimmer breathes in through the mouth. The head goes back in the water after the arms come out of the water as they are swinging forward over the surface of the water. If the head stays out too long, the recovery is hindered. The swimmer breathes out through mouth and nose till the next breath.

Normally, a breath is taken every other stroke. This can be sustained over long distances. Often, breathing every stroke slows the swimmer down. (At a certain level, a breathing stroke becomes just as fast as a nonbreathing stroke; therefore, very experienced competitors, such as Michael Phelps, may breathe every stroke.) Other intervals of breathing practised by elite swimmers include the "two up, one down" approach in which the swimmer breathes for two successive strokes and then keeps their head in the water on the next stroke, which is easier on the lungs. Swimmers with good lung capacity might also breathe every 3rd stroke during sprints for the finish. Some swimmers can even hold their breaths for an entire race (assuming that it is a short one). To be able to swim with best results it is important to keep one's head down when taking a breath. If the swimmer lifts his or her head too high the swimmer's hips often drop, creating drag, thus slowing the swimmer down. The closer one's head is to the water the better one swim is the general technique used by swimmers.

Swimming butterfly is difficult if the core is not utilized, and correct timing and body movement makes swimming butterfly much easier. The body moves in a wave-like fashion, controlled by the core, and as the chest is pressed down, the hips go up, and the posterior breaks the water surface and transfers into a fluid kick. During the push phase, the chest goes up and the hips are at their lowest position. In this style, the second pulse in the cycle is stronger than the first pulse, as the second pulse is more in flow with the body movement.

Although butterfly is very compatible with diving, the resulting reduction in wave drag does not lead to an overall reduction of drag. In the modern style of the butterfly stroke one does only little vertical movement of the body.

Butterfly uses the regular start for swimming. After the start a gliding phase follows under water, followed by dolphin kicks swim under water. Swimming under water reduces the drag from breaking the surface and is very economical. Rules allow for 15 m of underwater swimming before the head must break the surface, and regular swimming begins.

During turns and during the finish, both hands must simultaneously touch the wall while the swimmer remains swimming face down. The swimmer touches the wall with both hands while bending the elbows slightly. The bent elbows allow the swimmer to push himself or herself away from the wall and turn sideways. One hand leaves the wall to be moved to the front underwater. At the same time the legs are pulled closer and moved underneath of the body towards the wall. The second hand leaves the wall to be moved to the front over water. It is commonly referred to as an "over/under turn" or an "open turn". The legs touch the wall and the hands are at the front. The swimmer sinks under water and lies on the breast, or nearly so. Then the swimmer pushes off the wall, keeping a streamline position with the hands to the front. Similar to the start, the swimmer is allowed to swim 15 m underwater before the head must break the surface. Most swimmers dolphin kick after an initial gliding phase.

The finish requires the swimmer to touch the wall with both hands at the same time, in the same horizontal plane.

There are four styles of butterfly stroke.

"Arm pull down simultaneous with dolphin kick": After head goes underwater, both arms go underwater until lower than head. After first dolphin kick, raise both arms with relax. While rising arms, bend both knees and waist to send body back to the surface and prepare dolphin kick. Pull both arms downward while executing dolphin kick. After this sequence, immediately push the water backward. In this style, turning point from drowning to floating is at the time of waist bend.

Two additional styles of butterfly stroke are similar to the two styles above, but without a "second" dolphin kick. This allows the swimmer to conserve energy and be more relaxed.

All content from Kiddle encyclopedia articles (including the article images and facts) can be freely used under Attribution-ShareAlike license, unless stated otherwise. Cite this article:
Butterfly stroke Facts for Kids. Kiddle Encyclopedia.