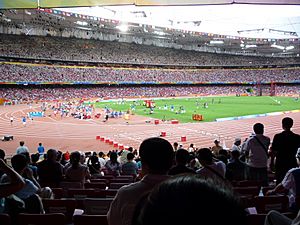 Athletics is an exclusive collection of sporting events that include competitive running, jumping, throwing, and walking. The most common types of athletics competitions are track and field, road running, cross country running, and race walking.

The International Association of Athletics Federations, the sport's governing body, defines athletics in six disciplines: track and field, road running, race walking, cross country running, mountain running, and trail running (mountain running was added in 2003 and trail running was added in 2015). All forms of athletics are individual sports with the exception of relay races. However, athletes' performances are often tallied together by country at international championships, and in the case of cross country and certain road races the finishing positions or times of the top athletes from each team or country are combined to declare a team victor. 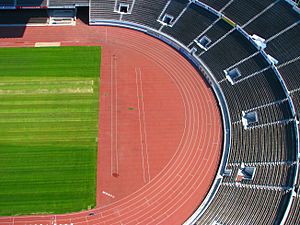 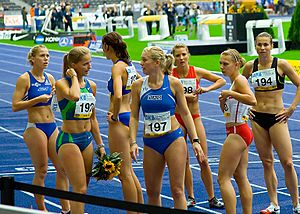 Track and field competitions emerged in the late 19th century and were typically contested between athletes who were representing rival educational institutions, military organisations and sports clubs. Participating athletes may compete in one or more events, according to their specialities. Men and women compete separately. Track and field comes in both indoor and outdoor formats, with most indoor competitions occurring in winter, while outdoor events are mostly held in summer. The sport is defined by the venue in which the competitions are held – the track and field stadium.

A variety of running events are held on the track which fall into three broad distance categories: sprints, middle-distance, and long-distance track events. Relay races feature teams comprising four runners each, who must pass a baton to their teammate after a specified distance with the aim of being the first team to finish. Hurdling events and the steeplechase are a variation upon the flat running theme in that athletes must clear obstacles on the track during the race. The field events come in two types – jumping and throwing competitions. In throwing events, athletes are measured by how far they hurl an implement, with the common events being the shot put, discus, javelin, and hammer throw. There are four common jumping events: the long jump and triple jump are contests measuring the horizontal distance an athlete can jump, while the high jump and pole vault are decided on the height achieved. Combined events, which include the decathlon (typically competed by men) and heptathlon (typically competed by women), are competitions where athletes compete in a number of different track and field events, with each performance going toward a final points tally.

Road running competitions are running events (predominantly long distance) which are mainly conducted on courses of paved or tarmac roads, although major events often finish on the track of a main stadium. In addition to being a common recreational sport, the elite level of the sport – particularly marathon races – are one of the most popular aspects of athletics. Road racing events can be of virtually any distance, but the most common and well known are the marathon, half marathon, 10 km and 5 km. The marathon is the only road running event featured at the IAAF World Championships in Athletics and the Summer Olympics, although there is also an annual IAAF World Half Marathon Championships. The marathon is also the only road running event featured at the IPC Athletics World Championships and the Summer Paralympics. The World Marathon Majors series includes the five most prestigious marathon competitions at the elite level – the Berlin, Boston, Chicago, London, and New York City marathons. 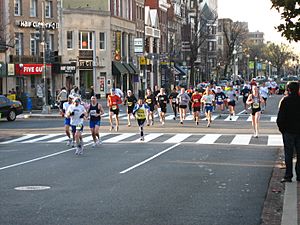 Runners in the popular National Marathon race in Washington, D.C.

The sport of road running finds its roots in the activities of footmen: male servants who ran alongside the carriages of aristocrats around the 18th century, and who also ran errands over distances for their masters. Foot racing competitions evolved from wagers between aristocrats, who pitted their footman against that of another aristocrat in order to determine a winner. The sport became professionalised as footmen were hired specifically on their athletic ability and began to devote their lives to training for the gambling events. The amateur sports movement in the late 19th century marginalised competitions based on the professional, gambling model. The 1896 Summer Olympics saw the birth of the modern marathon and the event led to the growth of road running competitions through annual events such as the Boston Marathon (first held in 1897) and the Lake Biwa Marathon and Fukuoka Marathons, which were established in the 1940s. The 1970s running boom in the United States made road running a common pastime and also increased its popularity at the elite level.

Ekiden contests – which originated in Japan and remain very popular there – are a relay race variation on the marathon, being in contrast to the typically individual sport of road running. 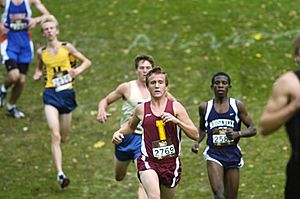 Cross country running is the most naturalistic of the sports in athletics as competitions take place on open-air courses over surfaces such as grass, woodland trails, and earth. It is both an individual and team sport, as runners are judged on an individual basis and a points scoring method is used for teams. Competitions are typically long distance races of 4 km (2.5 mi) or more which are usually held in autumn and winter. Cross country's most successful athletes often compete in long-distance track and road events as well.

The Crick Run in England in 1838 was the first recorded instance of an organised cross country competition. The sport gained popularity in British, then American schools in the 19th century and culminated in the creation of the first International Cross Country Championships in 1903. The annual IAAF World Cross Country Championships was inaugurated in 1973 and this remains the highest level of competition for the sport. A number of continental cross country competitions are held, with championships taking place in Asia, Europe, North America and South America. The sport has retained its status at the scholastic level, particularly in the United Kingdom and United States. At the professional level, the foremost competitions come under the banner of the IAAF Cross Country Permit Meetings.

While cross country competitions are no longer held at the Olympics, having featured in the athletics programme from 1912–1924, it has been present as one of the events within the modern pentathlon competition since the 1912 Summer Olympics. One variation on traditional cross country is mountain running, which incorporates significant uphill and/or downhill sections as an additional challenge to the course. Fell running and Orienteering are other competitive sports similar to cross country, although they feature an element of navigation which is absent from the set courses of cross country. 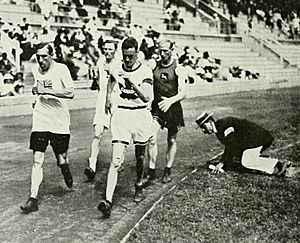 A track-side judge monitoring technique at the 1912 Summer Olympics in Stockholm, Sweden.

Racewalking is a form of competitive walking that usually takes place on open-air roads, although running tracks are also occasionally used. Racewalking is the only sport in athletics in which judges monitor athletes on their technique. Racewalkers must always have a foot in contact with the ground and their advancing leg must be straightened, not bent at the knee – failure to follow these rules results in disqualification from the race.

Racewalking finds its roots in the sport of pedestrianism which emerged in the late 18th century in England. Spectators would gamble on the outcome of the walking competitions. The sport took on an endurance aspect and competitions were held over long distances or walkers would have to achieve a certain distance within a specified time frame, such as Centurion contests of walking 100 miles (160 km) within 24 hours. During this period, racewalking was frequently held on athletics tracks for ease of measurement, and the 1908 Summer Olympics in London saw the introduction of the 3500-metre and 10-mile walks. Racewalking was briefly dropped from the Olympic programme in 1928, but the men's 50 kilometres race walk has been held at every Olympic Games but one since 1932. The men's 20 kilometres race walk was added to the Olympic athletics schedule in 1956 and the women's event was first held in 1992. The most common events in modern competition are over 10 km, 20 km and 50 km on roads, although women's 3 km and men's 5 km are held on indoor tracks. 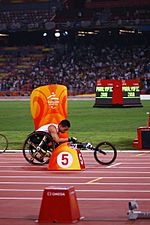 Competitor in a wheelchair race at the 2008 Summer Paralympics.

Athletes with physical disabilities have competed at separate international events since 1952. The International Paralympic Committee governs the competitions in athletics, and hosts the Paralympic Games, which have continued since 1960.

Competitors at elite level competitions, are classified by disability, to arrange athletes with a similar disability in the same event. A classified T12 athlete for example, is a track athlete with a visual impairment.

In wheelchair racing athletes compete in lightweight racing chairs. Most major marathons have wheelchair divisions and the elite racers consistently beat the runners on foot. The speed of wheel chair racers has caused difficulties for race organisers in properly staggering their start times compared to runners. A collision between Josh Cassidy (a wheelchair racer) and Tiki Gelana (a leading female marathoner) at the 2013 London Marathon brought the issue into the spotlight again.

Occasionally, athletes with a disability excel to compete with able bodied athletes. Legally blind Marla Runyan ran in the 2000 and 2004 Olympics and won a gold medal in the 1500 metres at the 1999 Pan American Games. Oscar Pistorius, a double amputee, has competed in the 2012 Olympics. At the 2011 World Championships Pistorius successfully made it to the 400 metres semi-final round and won a silver medal as part of South Africa's 4x400 metres relay team. In Masters athletics it is far more common to make an accommodation for athletes with a disability. Blind Ivy Granstrom set numerous Masters world records while being guided around the track.

All content from Kiddle encyclopedia articles (including the article images and facts) can be freely used under Attribution-ShareAlike license, unless stated otherwise. Cite this article:
Athletics (sport) Facts for Kids. Kiddle Encyclopedia.