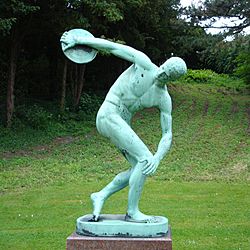 Statue of a discus thrower, Copenhagen.

The discus throw is an event in athletics, where a heavy disc is thrown for distance. It was invented in 708 BC in Ancient Greece. The goal is to throw the discus farther than your opponents.

The discus throw is the subject of a number of well-known ancient Greek statues and Roman copies of them.US thrower Al Oerter is one of only two athletes to win the same individual event at four consecutive Olympic Games. 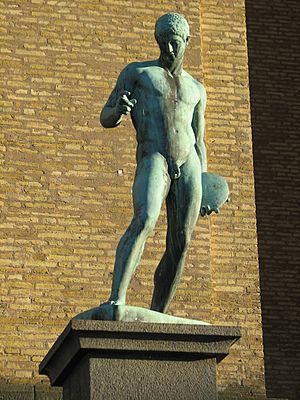 Discus is a routine part of most modern track-and-field meets at all levels and is a sport which is particularly iconic of the Olympic Games. The men's competition has been a part of the modern Summer Olympic Games since the first Olympic games in 1896. Images of discus throwers figured prominently in advertising for early modern Games, such as fundraising stamps for the 1896 games and the main posters for the 1920 and 1948 Summer Olympics.

The discus was re-discovered in Magdeburg, Germany, by Christian Georg Kohlrausch and his students in the 1870s. His work around the discus and the earlier throwing techniques have been published since the 1880.

The first modern athlete to throw the discus while rotating the whole body was František Janda-Suk from Bohemia (present Czech Republic). He invented this technique when studying the position of the famous statue of Discobolus. After only one year of developing the technique he gained the olympic silver in 1900.

The women's competition was added to the Olympic program in the 1928 games, although they had been competing at some national and regional levels previously. 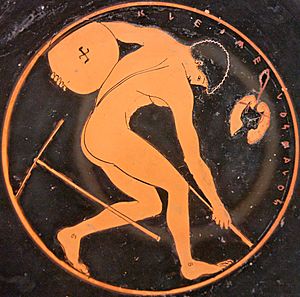 Discus-thrower, tondo of a kylix by the Kleomelos Painter, Louvre Museum 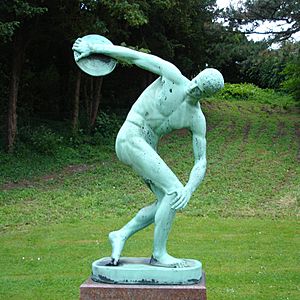 The typical discus has sides made of plastic, wood, fiberglass, carbon fiber or metal with a metal rim and a metal core to attain the weight. The rim must be smooth, with no roughness or finger holds. A discus with more weight in the rim produces greater angular momentum for any given spin rate, and thus more stability, although it is more difficult to throw. However, a higher rim weight, if thrown correctly, can lead to a farther throw. A solid rubber discus is sometimes used (see in the United States).

To make a throw, the competitor starts in a circle of 2.5m diameter, which is recessed in a concrete pad by 20 millimetres (0.79 in). The thrower typically takes an initial stance facing away from the direction of the throw. He then spins anticlockwise (for right-handers) around one and a half times through the circle to build momentum, then releases his throw. The discus must land within a 34.92-degree sector. The rules of competition for discus are virtually identical to those of shot put, except that the circle is larger, a stop board is not used and there are no form rules concerning how the discus is to be thrown.

The distance from the front edge of the circle to where the discus has landed is measured, and distances are rounded down to the nearest centimetre. The competitor's best throw from the allocated number of throws, typically three to six, is recorded, and the competitor who legally throws the discus the farthest is declared the winner. Ties are broken by determining which thrower has the longer second-best throw.

The basic motion is a forehanded sidearm movement. The discus is spun off the index finger or the middle finger of the throwing hand. In flight the disc spins clockwise when viewed from above for a right-handed thrower, and anticlockwise for a left-handed thrower. As well as achieving maximum momentum in the discus on throwing, the discus' distance is also determined by the trajectory the thrower imparts, as well as the aerodynamic behavior of the discus. Generally, throws into a moderate headwind achieve the maximum distance. Also, a faster-spinning discus imparts greater gyroscopic stability. The technique of discus throwing is quite difficult to master and needs lots of experience to get right, thus most top throwers are 30 years old or more.

The discus technique can be broken down into phases. The purpose is to transfer from the back to the front of the throwing circle while turning through one and a half circles. The speed of delivery is high, and speed is built up during the throw (slow to fast). Correct technique involves the buildup of torque so that maximum force can be applied to the discus on delivery. 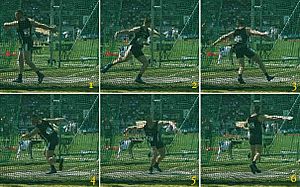 Rutger Smith in phases of the discus throw

During the wind-up, weight is evenly distributed between the feet, which are about shoulder distance and not overly active. The wind-up sets the tone for the entire throw; the rhythm of the throw is very important.

Focusing on rhythm can bring about the consistency to get in the right positions that many throwers lack. Executing a sound discus throw with solid technique requires perfect balance. This is due to the throw being a linear movement combined with a one and a half rotation and an implement at the end of one arm. Thus, a good discus thrower needs to maintain balance within the circle.

For a right handed thrower, the next stage is to move the weight over the left foot. From this position the right foot is raised, and the athlete 'runs' across the circle. There are various techniques for this stage where the leg swings out to a small or great extent, some athletes turn on their left heel (e.g. Ilke Wylluda) but turning on the ball of the foot is far more common.

The aim is to land in the 'power position', the right foot should be in the center and the heel should not touch the ground at any point. The left foot should land very quickly after the right. Weight should be mostly over the back foot with as much torque as possible in the body—so the right arm is high and far back. This is very hard to achieve. Power position.

The critical stage is the delivery of the discus, from this 'power position' the hips drive through hard, and will be facing the direction of the throw on delivery. Athletes employ various techniques to control the end-point and recover from the throw, such as fixing feet (to pretty much stop dead), or an active reverse spinning onto the left foot (e.g. Virgilijus Alekna).

Sports scientist Richard Ganslen researched the Aerodynamics of the Discus, reporting the discus will stall at an angle of 29°. 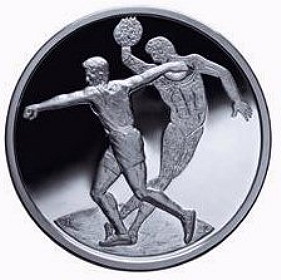 Discus throwers have been selected as a main motif in numerous collectors' coins. One of the recent samples is the €10 Greek Discus commemorative coin, minted in 2003 to commemorate the 2004 Summer Olympics. On the obverse of the coin a modern athlete is seen in the foreground in a half-turned position, while in the background an ancient discus thrower has been captured in a lively bending motion, with the discus high above his head, creating a vivid representation of the sport.

All content from Kiddle encyclopedia articles (including the article images and facts) can be freely used under Attribution-ShareAlike license, unless stated otherwise. Cite this article:
Discus throw Facts for Kids. Kiddle Encyclopedia.