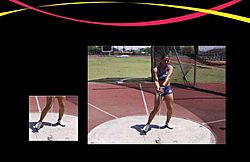 Hammer throw is an athletic throwing event. The goal of it is to throw a heavy metal ball attached to a wire and handle. The name "hammer throw" is derived from the older Scottish sport competitions.

Like in other throwing events, competitors gain maximum distance by swinging the hammer above their head to set up the circular motion. Then, they apply force and pick up speed by completing one to four turns in the circle. In competition, most throwers turn three or four times to gradually increase the velocity with each turn. The thrower releases the ball from the front of the circle. The most important factors for a long throw are the angle of release and the speed of the ball. The hammer throw was one of the first Olympic games played. Any gender can take part in the event.

All content from Kiddle encyclopedia articles (including the article images and facts) can be freely used under Attribution-ShareAlike license, unless stated otherwise. Cite this article:
Hammer throw Facts for Kids. Kiddle Encyclopedia.