Shot put is an athletics sport where people try to "put" a heavy weighted ball as far as they can. They are not allowed to throw it, but instead they push the ball out into the air. They "put" the ball by holding it at their neck and pushing it through the air. The shot put has been part of the Olympics since 1896. 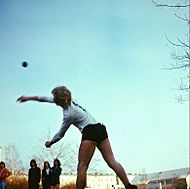 An athlete throwing a shot put.

The weight of the ball can vary from 6 to 16 pounds (2.76 to 7.26 kg), depending on level age and gender of the participants. The object of the sport is to throw it as far as possible.

The Shot put is similar to the javelin. It is an official Olympic event and can be seen at the Olympic games. The athlete cannot wear gloves when they are participating. If wearing gloves, the athlete will be disqualified.

The shot put event was first seen in the Middle Ages, when they would throw cannonballs at their enemies.

It is an outdoor event and cannot be played inside. It is a track and field event.

There are two types of putting styles: glide and spin (rotation). The glide was invented in the US in the year 1876. The spin was also developed in the US. It was invented by Parry O'Brian and made famous by Brian Oldfield.

Shot put was originally used in the Olympics to see who was the strongest athlete. Each athlete threw from a wooden square, and could only stand to throw. The shot put was a large stone ball. That is now a metal not softer than brass.

All content from Kiddle encyclopedia articles (including the article images and facts) can be freely used under Attribution-ShareAlike license, unless stated otherwise. Cite this article:
Shot put Facts for Kids. Kiddle Encyclopedia.