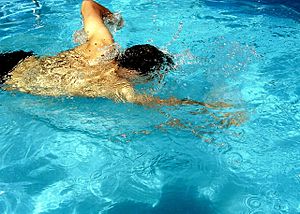 A person doing the front crawl

Swimming is the movement of the body through water using arms and legs. Most of the time equipment is not used. People swim for exercise, fun, and they can swim competitively.

Swimming can be done for competitive sport. Many schools use swimming as a physical training exercise. Some swimming is just for fun, like doing backflips under the water.

People can swim in the sea, swimming pools, rivers and lakes.

Swimming has been around for a long time. Humans learned how to swim from the sea creatures. When they started swimming, they could swim as well and fast as today.

Swimming works all the muscles simultaneously. It is impact free.

Competitive swimming became popular in the nineteenth century. The goal of competitive swimming is to constantly improve upon one's time(s), or to beat the competitors in any given event. However, some professional swimmers who do not hold a national or world ranking are considered the best in regard to their technical skills. Typically, an athlete goes through a cycle of training in which the body is overloaded with work in the beginning and middle segments of the cycle. The workload is decreased in the final stage as the swimmer approaches the competition in which he or she is to compete in. This final stage is often referred to as "shave and taper"; the swimmer tapering downs his or her workload to be able to perform at their optimal level. At the very end of this stage, before competition, the swimmer shaves off all exposed hair for the sake of reducing drag and having a sleeker and more hydrodynamic feel in the water. 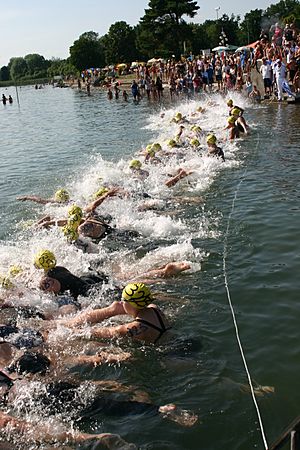 There are several styles in swimming. Some of them are: 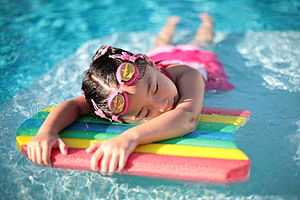 A Styrofoam flotation aid being used.

Traditionally, children were considered not able to swim independently until 4 years of age, although now infant swimming lessons are recommended to prevent drowning.

In Sweden, Denmark, Norway, Estonia and Finland, the curriculum for the fifth grade (fourth grade in Estonia) states that all children should learn how to swim as well as how to handle emergencies near water. Most commonly, children are expected to be able to swim 200 metres (660 ft)—of which at least 50 metres (160 ft) on their back – after first falling into deep water and getting their head under water. Even though about 95 percent of Swedish school children know how to swim, drowning remains the third most common cause of death among children.

In many places, swimming lessons are provided by local swimming pools, both those run by the local authority and by private leisure companies. Many schools also include swimming lessons into their Physical Education curricula, provided either in the schools' own pool or in the nearest public pool.

In the UK, the "Top-ups scheme" calls for school children who cannot swim by the age of 11 to receive intensive daily lessons. Children who have not reached Great Britain's National Curriculum standard of swimming 25 meters by the time they leave primary school receive a half-hour lesson every day for two weeks during term-time.

In Canada and Mexico there has been a call to include swimming in public school curriculum.

In the United States there is the Infant Swimming Resource (ISR) initiative that provides lessons for infant children, to cope with an emergency where they have fallen into the water. They are taught how to roll-back-to-float (hold their breath underwater, to roll onto their back, to float unassisted, rest and breathe until help arrives). 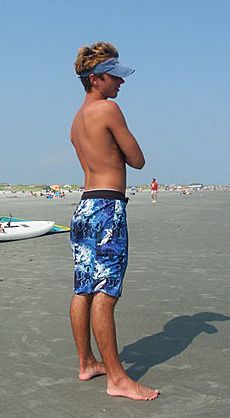 Boardshorts are a popular type of casual men's swimwear.

Standard everyday clothing is usually impractical for swimming and is unsafe under some circumstances. Most cultures today expect swimmers to wear swimsuits.

Men's swimsuits commonly resemble shorts, or briefs. Casual men's swimsuits (for example, boardshorts) are rarely skintight, unlike competitive swimwear, like jammers or diveskins. In most cases, boys and men swim with their upper body exposed, except in countries where custom or law prohibits it in a public setting, or for practical reasons such as sun protection.

Modern women's swimsuits are generally skintight (See bikini). Women's swimwear may also cover the midriff as well. Women's swimwear is often a fashion statement, and whether it is modest or not is a subject of debate by many groups, religious and secular.

Wetsuits provide both thermal insulation and flotation. Many swimmers lack buoyancy in the leg. The wetsuit reduces density and therefore improves buoyancy while swimming. It provides insulation by absorbing some of the surrounding water, which then heats up when in direct contact with skin. The wetsuit is the usual choice for those who swim in cold water for long periods of time, as it reduces susceptibility to hypothermia.

Some people also choose to wear no clothing while swimming; this is known as skinny dipping. It was common for males to swim naked in a public setting up to the early 20th century. Today, skinny dipping can be a rebellious activity or merely a casual one.

All content from Kiddle encyclopedia articles (including the article images and facts) can be freely used under Attribution-ShareAlike license, unless stated otherwise. Cite this article:
Human swimming Facts for Kids. Kiddle Encyclopedia.