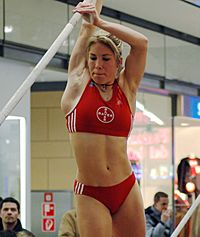 A Bikini is a type of swimsuit for women. It consists of two parts; pants and a bra top, leaving an uncovered area between the two. The bikini is an ancient invention, reinvented after the Second World War.

The bikini is perhaps the most popular female beachwear around the globe.

By the mid 2000s bikinis had become a US$811 million business annually, according to the NPD Group, a consumer and retail information company. The bikini has boosted spin-off services like bikini waxing and the sun tanning industries.

Predecessors of the bikini date back to antiquity, in Çatalhöyük and the Greco-Roman world. Artwork dating back to the Diocletian period (286-305 AD) in Villa Romana del Casale, Sicily depicts women in garments resembling bikinis in mosaics on the floor. The images of ten women, dubbed the "Bikini Girls", exercising in clothing that would pass as bikinis today, are the most replicated mosaic among the 37 million colored tiles at the site. Archeological finds, especially in Pompeii, show the Roman goddess Venus wearing a bikini. A statue of Venus in a bikini was found in a cupboard in the southwest corner in Casa della Venere, others were found in the front hall.

Finally, the modern bikini was introduced by French engineer Louis Réard and fashion designer Jacques Heim in Paris in 1946. Réard was a car engineer but by 1946 he was running his mother's lingerie boutique near Les Folies Bergères in Paris. Heim was working on a new kind of beach costume. It comprised two pieces, the bottom large enough to cover its wearer's navel. Réard named his swimsuit the "bikini", taking the name from the Bikini Atoll, one of a series of islands in the South Pacific where testing on the new atomic bomb was occurring that summer. The bikini became increasingly popular throughout the 1960s and 70s.

All content from Kiddle encyclopedia articles (including the article images and facts) can be freely used under Attribution-ShareAlike license, unless stated otherwise. Cite this article:
Bikini Facts for Kids. Kiddle Encyclopedia.