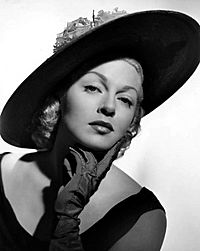 Lana Turner (February 8, 1921 - June 29, 1995) was an American actress. She was born in Wallace, Idaho. She was first discovered and signed into movie contract by MGM when she was 16. She played mainly feature roles and was one of Hollywood's first scream queens. She would become very popular in the 1940s and 1950s. Turner appeared in the television series Falcon Crest during 1982 and 1983. The actress died from throat cancer in 1995 in Century City, Los Angeles.

All content from Kiddle encyclopedia articles (including the article images and facts) can be freely used under Attribution-ShareAlike license, unless stated otherwise. Cite this article:
Lana Turner Facts for Kids. Kiddle Encyclopedia.