Hedy Lamarr was born as Hedwig Eva Maria Kiesler in Vienna. She was the daughter of a bank director and a concert pianist. She studied ballet and piano at age 10.

In her third movie she played her first title role (Man braucht kein Geld or No Money Needed). When she worked with the famous director Max Reinhard in Berlin, he said, that she was the most beautiful woman in Europe. In 1937 she signed a contract with MGM in London and went to the USA, where she spent the rest of her life. She became a US citizen in 1953. She died in Altamonte Springs, Florida. 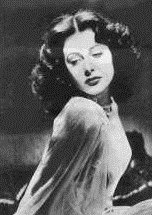 All content from Kiddle encyclopedia articles (including the article images and facts) can be freely used under Attribution-ShareAlike license, unless stated otherwise. Cite this article:
Hedy Lamarr Facts for Kids. Kiddle Encyclopedia.