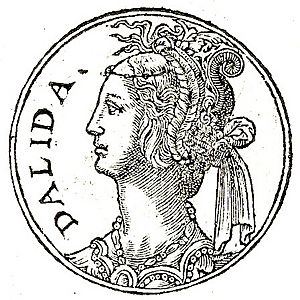 Delilah ( Hebrew: דְּלִילָה Dəlīlāh, meaning "delicate"; Arabic Dalilah; Greek Δαλιδά Dalidá) is a woman mentioned in the sixteenth chapter of the Book of Judges in the Hebrew Bible. She is loved by Samson, a Nazirite who possesses great strength and serves as the final Judge of Israel. Delilah is bribed by the lords of the Philistines to discover the source of his strength. After three failed attempts at doing so, she finally goads Samson into telling her that his vigor is derived from his hair. As he sleeps, Delilah orders a servant to cut Samson's hair, thereby enabling her to turn him over to the Philistines.

Delilah has been the subject of both rabbinic and Christian commentary; rabbinic literature identifies her with Micah's mother in the biblical narrative of Micah's Idol, while some Christians have compared her to Judas Iscariot, the man who betrayed Jesus. Scholars have noted similarities between Delilah and other women in the Bible, such as Jael and Judith, and have discussed the question of whether the story of Samson's relationship with Delilah displays a negative attitude towards foreigners. Notable depictions of Delilah include John Milton's closet drama Samson Agonistes and Cecil B. DeMille's 1949 Hollywood film Samson and Delilah. Her name has become associated with treacherous and voluptuous women.

All content from Kiddle encyclopedia articles (including the article images and facts) can be freely used under Attribution-ShareAlike license, unless stated otherwise. Cite this article:
Delilah Facts for Kids. Kiddle Encyclopedia.