Century City is a 176-acre (71.2 ha) neighborhood and business district in Los Angeles' Westside. Outside of Downtown Los Angeles, Century City is one of the metropolitan area's most prominent employment centers, and its skyscrapers form a distinctive skyline on the Westside.

The district was developed on the former backlot of film studio 20th Century Fox, and its first building was opened in 1963. There are two private schools, but no public schools in the neighborhood. Important to the economy are the Westfield Century City shopping center, business towers, and Fox Studios.

The land of Century City belonged to cowboy actor Tom Mix (1880-1940), who used it as a ranch. It later became a backlot of 20th Century Fox, which still has its headquarters just to the southwest.

In 1956, Spyros Skouras (1893-1971), who served as the President of 20th Century Fox from 1942-62, and his nephew-in-law Edmond Herrscher (died 1983), an attorney sometimes known as "the father of Century City," decided to repurpose the land for real estate development. The following year, in 1957, they commissioned a master-plan development from Welton Becket Associates, which was unveiled at a major press event on the "western" backlot later that year.

In 1961, after Fox suffered a string of expensive flops, culminating with the financial strain put on the studio by the very expensive production of Cleopatra, the film studio sold about 180 acres (0.73 km2) to developer William Zeckendorf and Aluminum Co. of America, also known as Alcoa, for US$300 million (US$2.4 billion in 2014's money). Herrscher had encouraged his uncle-in-law to borrow money instead, but once Skouras refused, he was out of the picture.

Much of the shopping center's architecture and style can be seen in numerous sequences in the 1967 Fox film, A Guide for the Married Man, as well as in a sequence in another Fox film of the same year, Caprice. Century City's plaza as it appeared in the early 1970s can be viewed in several scenes of still another Fox film, Conquest of the Planet of the Apes (1972). 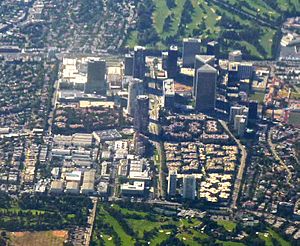 The 2000 U.S. census counted 5,513 residents in the 0.70-square-mile Century City neighborhood—or 7,869 people per square mile, an average population density for the city and county. The Southern California Association of Governments estimates that the daytime population amounts to 48,343 on a working day. In 2008, the city estimated that the resident population had increased to 5,934.

In 2008, the median age for residents was 46, older than average for the city and the county. The percentage of residents aged 65 and older (26.4%) was the highest for any neighborhood in Los Angeles County. The percentages of widowed men and women and of divorced men were among the county's highest. Military veterans accounted for 11.9% of the population, a high rate for the city and the county.

The median yearly income in 2014 was $95,135, a high figure for Los Angeles. The percentage of households that earned $125,000 and up was high for Los Angeles County. The average household size of 1.8 people was low for Los Angeles. Renters occupied 39.6% of the housing stock and apartment owners held 60.4%.

All content from Kiddle encyclopedia articles (including the article images and facts) can be freely used under Attribution-ShareAlike license, unless stated otherwise. Cite this article:
Century City, Los Angeles Facts for Kids. Kiddle Encyclopedia.