Thomas Edwin Mix (born Thomas Hezikiah Mix; January 6, 1880 – October 12, 1940) was an American film actor and the star of many early Western movies between 1909 and 1935. He appeared in 291 films, all but nine of which were silent movies. He was Hollywood's first Western star and helped define the genre as it emerged in the early days of the cinema.

Thomas Hezikiah Mix was born January 6, 1880, in Mix Run, Pennsylvania, about 62 miles (100 km) north of State College, Pennsylvania, to Edwin Elias Mix and Elizabeth Heistand. He grew up in nearby DuBois, Pennsylvania, where his father, a stable master for a wealthy lumber merchant, taught him to ride and love horses. He spent time working on a local farm owned by John DuBois, a lumber businessman. He had dreams of being in the circus and was rumored to have been caught by his parents practicing knife-throwing tricks against a wall, using his sister as an assistant.

In April 1898, during the Spanish–American War, he enlisted in the Army under the name Thomas E. (Edwin) Mix. His unit never went overseas, and Mix later failed to return for duty after an extended furlough when he married Grace I. Allin on July 18, 1902. Mix was listed as AWOL on November 4, 1902, but was never court-martialed nor apparently even discharged. His marriage to Allin was annulled after one year. In 1905, Mix married Kitty Jewel Perinne, but this marriage also ended within a year. He next married Olive Stokes on January 10, 1909, in Medora, North Dakota. On July 13, 1912, Olive gave birth to their daughter Ruth.

In 1905, Mix rode in President Theodore Roosevelt's inaugural parade with a group of 50 horsemen led by Seth Bullock, which included several former Rough Riders. Years later, Hollywood publicists muddled this event to imply that Mix had been a Rough Rider himself.

Mix went to Oklahoma and lived in Guthrie, working as a bartender and other odd jobs. He was briefly night marshal of Dewey, Oklahoma, in 1911. He eventually found employment at the Miller Brothers 101 Ranch, one of the largest ranching businesses in the United States, covering 101,000 acres (41,000 ha), hence its name. The ranch had its own touring Wild West show in which Mix appeared. He stood out as a skilled horseman and expert shot, winning national riding and roping contests at Prescott, Arizona, in 1909, and Canon City, Colorado, in 1910. 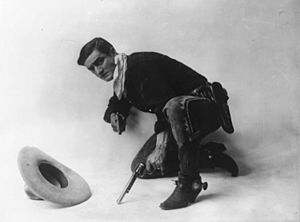 Mix began his film career as a supporting cast member with the Selig Polyscope Company. His first appearance was in a short film, The Cowboy Millionaire, released on October 21, 1909. In 1910, he appeared as himself in a short documentary film, Ranch Life in the Great Southwest, in which he displayed his skills as a cattle wrangler. Shot at the Selig studio in the Edendale district of Los Angeles (now known as Silver Lake), the film was a success, and Mix became an early motion picture star.

Mix performed in more than 100 films for Selig, many of which were filmed in Las Vegas, New Mexico. While with Selig he co-starred in several films with Victoria Forde, and they fell in love. He divorced Olive Stokes in 1917. By then, Selig Polyscope had encountered severe financial difficulties, and Mix and Forde both subsequently signed with Fox Film Corporation, which had leased the Edendale studio. They married in 1918 and had a daughter, Thomasina (Tommie) Mix, in February 1922.

Mix made more than 160 cowboy films throughout the 1920s. These featured action-oriented scripts contrasted with the documentary style of his work with Selig. Heroes and villains were sharply defined and a clean-cut cowboy always saved the day. Millions of American children grew up watching his films on Saturday afternoons. His intelligent and handsome horse, known as "Tony the Wonder Horse", also became a celebrity. Mix did his own stunts and was frequently injured.

In 1913, Mix moved his family to a ranch he purchased in Prescott called Bar Circle A Ranch. He spent a lot of time at the ranch when taking a break from filming. A number of the movies were actually filmed in the Prescott home. During this time, Mix had success in the local Prescott Frontier Days rodeo, which lays claim to being the "world's oldest rodeo." In 1920, he took first prize in a bull-riding contest. Today, his Bar Circle A Ranch developed into a planned community called Yavapai Hills where there is still a street named Bar Circle A Road. 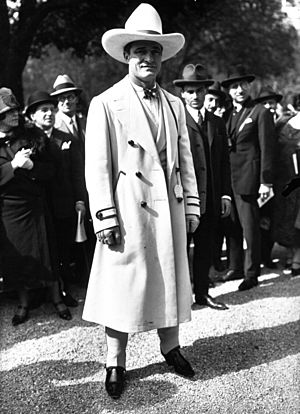 Mix's salary at Fox reached $7,500 a week. Gossip columnist Louella Parsons wrote that he had his initials in electric lights on the top of his house. His performances were noted for their realism and for screen-friendly action stunts and horseback riding, attention-grabbing cowboy costumes, and showmanship. At the Edendale lot, Mix built a 12-acre (4.9 ha) shooting set called Mixville. Loaded with western props and furnishings, it has been described as a "complete frontier town, with a dusty street, hitching rails, a saloon, jail, bank, doctor's office, surveyor's office, and the simple frame houses typical of the early Western era." Near the back of the lot an Indian village of lodges was ringed by miniature plaster mountains which were said to be, on screen, "ferociously convincing". The set also included a simulated desert, a large corral, and (to facilitate interior shots) a ranch house with no roof.

Mix played hard-to-get, threatening to move to Argentina to make films or to join the circus, but eventually he signed with FBO, although he then left the studio for Universal after salary disputes with FBO studio head Joseph P. Kennedy.

In 1929, Mix was a pallbearer at the funeral of Wyatt Earp.

Mix appeared with the Sells-Floto Circus in 1929, 1930, and 1931 at a reported weekly salary of $20,000 (equivalent to $249,000 in 2018). He and Forde divorced in 1931. Meanwhile, the Great Depression (along with the actor's free-spending ways and many wives) reportedly had wiped out most of his savings. In 1932, he married his fifth wife, Mabel Hubbell Ward. Universal Pictures approached him that year with an offer to perform in "talkies," which included script and cast approval. He acted in nine films for Universal, but because of injuries he received while filming, he was reluctant to do any more. Mix then appeared with the Sam B. Dill circus, which he reportedly bought two years later (1935).

Mix's last screen appearance was a 15-episode sound Mascot Pictures serial, The Miracle Rider (1935); he received $40,000 for the four weeks of filming. Outdoor action sequences for the production were filmed primarily on the Iverson Movie Ranch in Chatsworth, California, on the outskirts of Los Angeles. The site was known for its huge sandstone boulders, and one of them later became known as Tom Mix Rock when it was discovered it had been used in The Miracle Rider. In one episode, Mix was filmed descending from the top of the rock, with boot holes carved into it to assist him in making the descent. The rock and the boot holes, although unmarked, is in the Garden of the Gods park in Chatsworth.

Also in 1935, Texas governor James Allred named Mix an honorary Texas Ranger. Mix returned to circus performing, now with his eldest daughter Ruth, who appeared in some of his films. In 1938, he went to Europe on a promotional trip, leaving Ruth behind to manage the circus. Without him, however, the circus soon failed, and he later excluded her from his will. Mix had reportedly made over $6 million (equivalent to $93 million in 2018) during his 26-year film career. 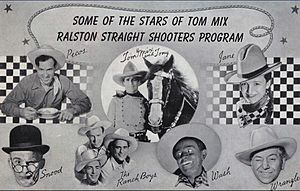 In 1933, Ralston Purina obtained his permission to produce the radio series Tom Mix Ralston Straight Shooters, which, but for one year during World War II, was popular throughout most of the 1930s through the early 1950s, well after Mix's death. Mix never appeared on these broadcasts (his voice, damaged by a bullet to the throat and repeated broken noses, was not fit for radio) and was instead played by radio actors: Artells Dickson (early 1930s), Jack Holden (from 1937), Russell Thorsen (early 1940s) and Joe "Curley" Bradley (from 1944). Others in the supporting cast included George Gobel, Harold Peary and Willard Waterman.

The Ralston company offered ads during the radio program for listeners to send in for a series of 12 special Ralston–Tom Mix comic books available only by writing the Ralston Company by mail.

Most of Mix's radio work has been lost over the years; recordings of only approximately 30 scattered episodes, and no complete story arcs, survive. 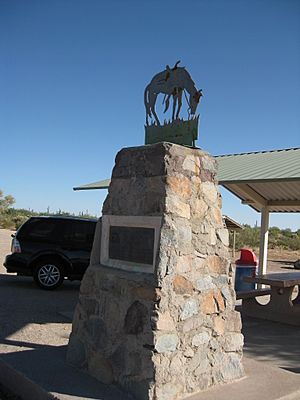 On October 12, 1940, after visiting Pima County Sheriff Ed Echols in Tucson, Arizona, Mix headed north towards Phoenix on U.S. Highway 80 (now Arizona State Route 79), driving his 1937 Cord 812 Phaeton. He stopped to call his agent at the Oracle Junction Inn, a popular gambling and drinking establishment, then continued toward Phoenix. About eighteen miles south of Florence, Mix came upon construction barriers at a bridge washed away by a flash flood. Unable to stop in time, his car swerved twice, then overturned in a gully. A large aluminum suitcase containing money, traveler's checks, and jewels, situated on the package shelf behind his head, hurtled forward and struck him, breaking his neck. He was 60 years old.

His funeral took place at the Little Church of the Flowers in Glendale, California, on October 16, 1940, and was attended by thousands of fans and Hollywood personalities. He was interred in the Forest Lawn Memorial Park Cemetery.

A small stone memorial marks the site of his death on State Route 79, and the nearby gully is known as "Tom Mix Wash". The marker bears the inscription: "In memory of Tom Mix, whose spirit left his body on this spot and whose characterization and portrayals in life served to better fix memories of the old West in the minds of living men." 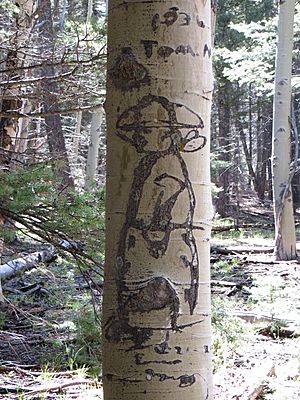 Tom Mix was the acknowledged "King of Cowboys" when Ronald Reagan and John Wayne were young, and the influence of his screen persona can be seen in their approach to portraying cowboys. When an injury caused football player Marion Morrison (later known as John Wayne) to drop out of the University of Southern California, Mix helped him find work moving props in the back lot of Fox Studios. That was the beginning of Wayne's Hollywood career.

Mix made 291 movies throughout his career. As of 2007, only about 10% of these were known to be available for viewing, though it is unclear how many are now considered lost films. The 1937 Fox vault fire lost most of the archive of his films made with Fox. 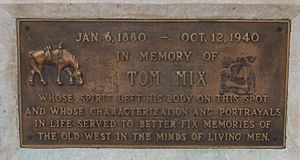 For his contribution to the motion picture industry, Mix has a star on the Hollywood Walk of Fame at 1708 Vine Street. His cowboy boot prints, palm prints and the hoof prints of his horse, Tony, are at Grauman's Chinese Theatre, at 6925 Hollywood Boulevard. In 1958 Mix was inducted posthumously into the Western Performers Hall of Fame at the National Cowboy & Western Heritage Museum in Oklahoma City, Oklahoma. In 1959, a "Monument to the Stars" was erected on Beverly Drive (where it intersects Olympic Boulevard and becomes Beverwil) in Beverly Hills. The memorial consists of a bronze-green spiral of sprocketed "camera film" above a multi-sided tower, embossed with full-length likenesses of early stars who appeared in famous silent movies. Those memorialized include Douglas Fairbanks, Mary Pickford, Will Rogers, Conrad Nagel, Rudolph Valentino, Fred Niblo, Harold Lloyd, and Mix. There is also a Tom Mix museum in Dewey, Oklahoma. Additionally, from 1986–2002 there existed another museum in his birthplace of Mix Run, Pennsylvania. Between 1980 and 2004, 21 Tom Mix festivals were held during the month of September, most of them in DuBois, Pennsylvania. 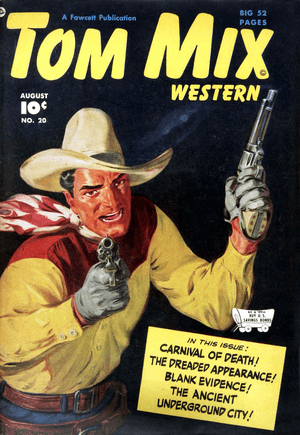 Tom Mix was often portrayed in comic books, primarily during the heyday of Western-themed comics, the 1940s and 1950s. 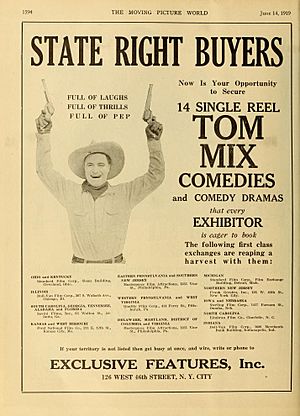 All content from Kiddle encyclopedia articles (including the article images and facts) can be freely used under Attribution-ShareAlike license, unless stated otherwise. Cite this article:
Tom Mix Facts for Kids. Kiddle Encyclopedia.