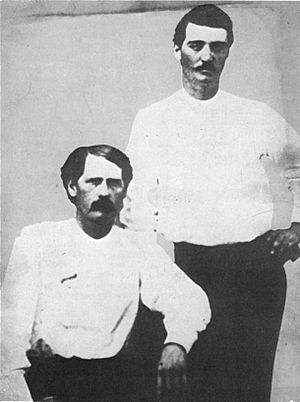 Bat Masterson (left) and Wyatt Earp in Dodge City, 1876. The scroll on Earp's chest is a cloth pin-on badge 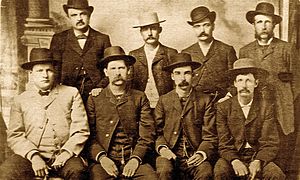 Wyatt Berry Stapp Earp (March 19, 1848 – January 13, 1929) was a Deputy U.S. Marshal, Deputy Sheriff, and Deputy Town Marshal in the Old West. In Tombstone, Arizona Territory, Earp took part in the Gunfight at (near) the O.K. Corral, during which lawmen killed three outlaws.

He is often regarded as the central figure in the shootout in Tombstone, but his brother Virgil was Tombstone City Marshal and Deputy U.S. Marshal that day. His brother had more experience as a sheriff, constable, marshal, and soldier in combat.

After an unsettled life as a young man, Earp landed in the cattle boomtown of Wichita, Kansas, where he became a deputy city marshal for one year and developed a solid reputation as a lawman. In 1876, he followed his brother James to Dodge City, Kansas, where he became an assistant city marshal. In winter 1878, he went to Texas to gamble, where he met John Henry "Doc" Holliday, whom Earp said saved his life.

Earp moved constantly throughout his life from one boomtown to another. He left Dodge City in 1879 and moved to Tombstone with his brothers James and Virgil, where a silver boom was underway. The Earps bought an interest in the Vizina mine and some water rights. Wyatt, Virgil, and their younger brother Morgan held various law enforcement positions that put them in conflict with Tom and Frank McLaury, and Ike and Billy Clanton, who threatened to kill the Earps.

The conflict escalated over the next year, culminating on October 26, 1881 in the Gunfight at the O.K. Corral, in which the Earps and Holliday killed three of the "Cowboys" (the Clanton/ McLaury group). In the next five months, Virgil was ambushed and maimed, and Morgan was assassinated. Pursuing a vendetta, Wyatt, his brother Warren, Holliday, and others formed a federal posse that killed three of the Cowboys whom they thought responsible. Wyatt was never wounded in any of the gunfights, unlike his brothers Virgil and James or Doc Holliday, which only added to his mystique after his death.

After Earp died in 1929, a flattering, largely fictionalized biography was published in 1931. It became a bestseller, and made his reputation as a fearless lawman. Since then, Wyatt Earp has been the subject of and model for numerous films, TV shows, biographies, and works of fiction that have increased his mystique. Earp's modern-day reputation is that of the Old West's "toughest and deadliest gunman of his day". Wyatt Earp has become synonymous with the image of the Western lawman, and is a symbol of American frontier justice.

Two years before his death, Earp defended his decisions before the Gunfight at the O.K. Corral and his actions afterward in an interview with Stuart Lake, author of the 1931 largely fictionalized biography, Wyatt Earp: Frontier Marshal:

For my handling of the situation at Tombstone, I have no regrets. Were it to be done over again, I would do exactly as I did at that time. If the outlaws and their friends and allies imagined that they could intimidate or exterminate the Earps by a process of murder, and then hide behind alibis and the technicalities of the law, they simply missed their guess. I want to call your particular attention again to one fact, which writers of Tombstone incidents and history apparently have overlooked: with the deaths of the McLowerys, the Clantons, Stillwell, Florentino Cruz, Curly Bill, and the rest, organized, politically protected crime and depredations in Cochise County ceased.

All content from Kiddle encyclopedia articles (including the article images and facts) can be freely used under Attribution-ShareAlike license, unless stated otherwise. Cite this article:
Wyatt Earp Facts for Kids. Kiddle Encyclopedia.