Pella is a city in Marion County, Iowa, United States, with a population of 10,352 at the time of the 2010 census. Pella is the home of Central College, as well as several manufacturing companies, including Pella Corporation and Vermeer Manufacturing Company.

In 1847, 800 Dutch immigrants led by Dominee (Minister) Hendrik (Henry) P. Scholte settled the area known as Pella. The name "Pella" is a reference to Perea, where the Christians of Jerusalem had found refuge during the Roman–Jewish war of 70; the name was selected because the Dominee and the rest were also seeking religious freedom. It was the childhood home of Wyatt Earp, whose father Nicholas Porter Earp had settled on a farm near Pella. His brothers Warren and Morgan were born in Pella. 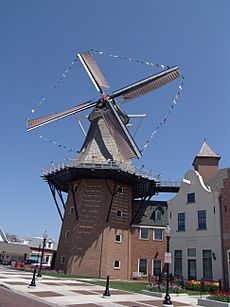 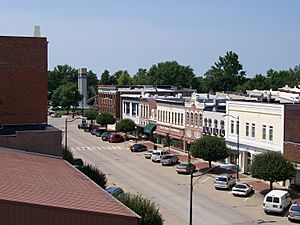 Franklin Street in Pella and some of the businesses located there: Notable in the background are the Tulip Toren (tall white statue) and Information Windmill located in Pella's Central Park. 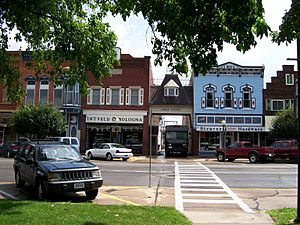 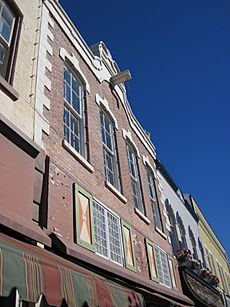 Pella is home to a number of local events and architectural sites.

The Vermeer Mill is a fully functional 1850s-style windmill, reaching 134 ft (41 m) high. The Vermeer Mill grinds wheat into flour using only wind power and is the tallest working windmill in the United States.

The Pella Opera House, built in 1900, was renovated in 1990 and is a popular entertainment destination, featuring stained-glass windows and ornate tin ceilings. A canal winds through nearby Molengracht Plaza, home to a number of shops, restaurants, hostelry, a movie theatre, and a full-size working drawbridge. On June 28, 2011, Sarah Palin visited the opera house for the premiere of The Undefeated, a documentary about her role in Alaska politics and rise to national attention.

The annual Tulip Time Festival is a celebration of Pella's Dutch heritage. It features tulip gardens, performances, crafters, music, food, Dutch costumes, and daily parades. The festival is held for three days (Thursday, Friday, and Saturday) during the first weekend in May. A queen and court are selected from the two high schools in the town to represent Pella and advertise the Festival. During the 2010 Festival, a world record was set for the most people dancing in wooden shoes. Over 2,600 people danced for more than six minutes to set the new standard.

Pella Dutch is a Dutch dialect spoken in Pella based on South Guelderish dialect.

A few miles to the west is Lake Red Rock, Iowa's largest reservoir, a popular destination for biking, hiking, boating, and fishing.

All content from Kiddle encyclopedia articles (including the article images and facts) can be freely used under Attribution-ShareAlike license, unless stated otherwise. Cite this article:
Pella, Iowa Facts for Kids. Kiddle Encyclopedia.