West Los Angeles is a term for two residential and commercial areas in the city of Los Angeles, California, mapped differently by different sources and on opposite sides of the Interstate 405 Freeway. Each of them lies within the larger Westside region of Los Angeles County and together they comprise the 90025 zip code. 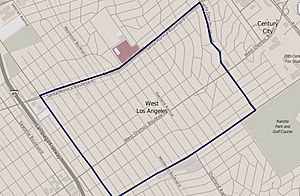 The Automobile Club of Southern California does not mark boundaries on its map, but centers the neighborhood south of Santa Monica Boulevard, west of Interstate 405, north of Olympic Boulevard and east of Barrington Avenue. The borders of the official West Los Angeles Neighborhood Council correspond closely to this second definition. Specifically, its district stretches from the 405 freeway in the east to Centinela Avenue in the west and Wilshire Boulevard in the north and the 10 freeway in the south. This is roughly the same area labeled as "Sawtelle" in the Mapping L.A. website of the Los Angeles Times

However, according to the Mapping L.A. website of the Los Angeles Times, West Los Angeles lies south of Santa Monica Boulevard, west of Beverly Glen Boulevard, north of Pico Boulevard and east of Sepulveda Boulevard.

In 2003, a Los Angeles Times correspondent noted that:

The meaning of the term West Los Angeles varies widely. Some use it to describe the entire Westside including Santa Monica, Venice and stretching east to Western Avenue. More precisely, though, it is the portion of incorporated Los Angeles between the Santa Monica city limits on the west, Wilshire Boulevard on the north, Century City to the east and extending just beyond National Boulevard on the south. Sections of West L.A. run the gamut from stylish Cheviot Hills to a cluster of generic homes east of Bundy Drive.

Her report on the meaning of West Los Angeles also included Rancho Park and the Westdale Trousdale area near National Boulevard and Barrington Avenue.

The east Mapping L.A. area was highly educated, with 60.4% of residents 25 and older holding a four-year degree, a higher ratio than found in the rest of the city or the county.

The Stoner Recreation Center is situated in the area. The center includes a waterpark, barbecue pits, a lighted baseball diamond, lighted outdoor basketball courts, a children's play area, a lighted football field, an indoor gymnasium without weights and a capacity of 300 people, picnic tables, a lighted soccer field, lighted tennis courts, and lighted volleyball courts. The Annual Cherry Blossom Festival, co-sponsored by the West Los Angeles Japanese American Community Center, is held at the park. Other parks and recreations in the area are Cheviot Hills Park, Rancho Park Golf Course and Reynier Park. Sawtelle Boulevard has become one of the most prominent food streets in the city and the entire 90025 zip code, encompassing both sides of the 405 freeway, is undergoing more teardowns of old residences than anywhere other in the city.

All content from Kiddle encyclopedia articles (including the article images and facts) can be freely used under Attribution-ShareAlike license, unless stated otherwise. Cite this article:
West Los Angeles Facts for Kids. Kiddle Encyclopedia.