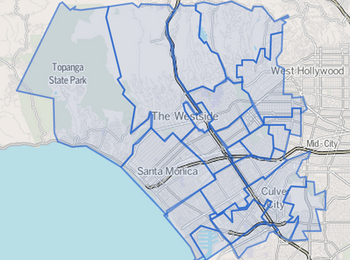 The Westside.
Map by the Los Angeles Times

According to the Mapping L.A. survey of the Los Angeles Times, the Westside region consists of: 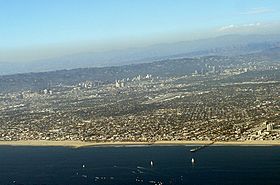 Fifty-three percent of West Los Angeles residents aged 25 and older had earned a 4-year degree by 2000, according to Census Bureau figures quoted by the Los Angeles Times. They included 89,620 people with master's degrees or higher and 117,695 with bachelor's degrees. In addition, 95,187 people in that age range had some college experience. There were 46,823 with high school diplomas but 40,451 who had dropped out before graduating. As of 2019, the median income of the neighborhood was about $96,300.

Other post-secondary schools in the Westside are as follows:

The view from the Getty Center, centered on the Westside as the 405 goes through the Sepulveda Pass in the Santa Monica Mountains and down through the city

All content from Kiddle encyclopedia articles (including the article images and facts) can be freely used under Attribution-ShareAlike license, unless stated otherwise. Cite this article:
Westside (Los Angeles County) Facts for Kids. Kiddle Encyclopedia.