West Hollywood, occasionally referred to locally as WeHo, is a city in Los Angeles County, California, United States. Incorporated in 1984, it is home to the Sunset Strip. As of the 2010 census, its population was 34,399. It is considered one of the most prominent gay villages in the United States.

West Hollywood is bounded by the city of Beverly Hills on the west, and on other sides by neighborhoods of the city of Los Angeles: Hollywood Hills on the north, Hollywood on the east, the Fairfax District on the southeast, and Beverly Grove on the southwest. The city's irregular boundary is featured in its logo; it was largely formed from the unincorporated Los Angeles County area that had not become part of the surrounding cities.

West Hollywood benefits from a very dense, compact urban form with small lots, mixed land use, and a walkable street grid. According to Walkscore, a website that ranks cities based on walkability, West Hollywood is the most walkable city in California with a Walkscore of 89. Commercial corridors include the nightlife and dining focused on the Sunset Strip, along Santa Monica Boulevard, and the Avenues of Art & Design along Robertson, Melrose, and Beverly Boulevard.

West Hollywood has a Subtropical-semi-arid climate with year-round warm weather. The record high temperature of 111 °F was recorded September 26, 1963, while the record low of 24 °F was recorded on January 4, 1949. Snow is rare in West Hollywood, with the last accumulation occurring in 1949. Rainfall is sparse (only 13 inches annually), and falls mainly during winter months.

Most historical writings about West Hollywood began in the late-18th century with European colonization when the Portuguese explorer João Rodrigues Cabrilho arrived offshore and claimed the already inhabited region for Spain. Around 5,000 of the indigenous inhabitants from the Tongva Indian tribe canoed out to greet Juan Cabrillo. The Tongva tribe was a nation of hunter-gatherers known for their reverence of dance and courage. By 1771, these native people had been severely ravaged by diseases brought in by the Europeans from across wide oceans. The Spanish mission system changed the tribal name to "Gabrielinos", in reference to the Mission de San Gabriel. Early in 1770 Gaspar de Portola's Mexican expeditionary force stopped just south of the Santa Monica Mountains near what would become West Hollywood to draw pitch (la brea) from tar pits to waterproof their belongings and to say mass. The Gabrielinos are believed to have burned the pitch for fuel.

By 1780, what became the "Sunset Strip" was the major connecting road for El Pueblo de Los Angeles, and all ranches westward to the Pacific Ocean. This land passed through the hands of various owners during the next one hundred years, and it was called names such as "La Brea" and "Plummer" that are listed in historical records. Most of this area was part of the Rancho La Brea, and eventually it came to be owned by the Henry Hancock family.

During the final decade years of the nineteenth century, the first large land development in what would later become West Hollywood—the town of "Sherman"—was established by Moses Sherman and his partners of the Los Angeles Pacific Railroad, an interurban railroad line which later became part of the Pacific Electric Railway system. Sherman became the location of the railroad's main shops, railroad yards, and "car barns". Many working-class employees of the railroad settled in this town. It was during this time that the city began to earn its reputation as a loosely regulated, liquor-friendly (during Prohibition) place for eccentric people wary of government interference. Despite several annexation attempts, the town elected not to become part of the City of Los Angeles. In a controversial decision, in 1925 Sherman adopted "West Hollywood", "...a moniker pioneered earlier in the decade by the West Hollywood Realty Board" as its informal name, though it remained under the governance of Los Angeles County.

For many years, the area that is now the city of West Hollywood was an unincorporated area in the midst of Los Angeles. Because gambling was illegal in the city of Los Angeles, but still legal in Los Angeles County, the 1920s saw the proliferation of many casinos, night clubs, etc., along Sunset Boulevard (which starts in downtown Los Angeles and runs westward). These businesses were immune from the sometimes heavy-handed law-enforcement of the L.A. Police Department.

Some people connected with movie-making were attracted to this less-restricted area of the County, and a number of architecturally distinctive apartment buildings and apartment hotels were built. Many interior designers, decorators and "to the trade" furnishing showrooms located in West Hollywood dating back to the middle of the century.

Eventually, the area and its extravagant nightclubs fell out of favor. However, the Sunset Strip and its restaurants, saloons, and nightclubs continued to be an attraction for out-of-town tourists. During the late 1960s, the Sunset Strip was transformed again during the hippie movement which brought a thriving music publishing industry coupled with "hippie" culture. Some young people from all over the country flocked to West Hollywood.

The most recent migration to West Hollywood came about after the dissolution of the Soviet Union, when thousands of Russian Jews immigrated to the city. A majority of the 5,000 to 6,000 Russian Jews settled in two major immigration waves, 1978–79 and 1988–92. Other than New York, West Hollywood's Russian-speaking community is the most concentrated single Russian-speaking region in United States. 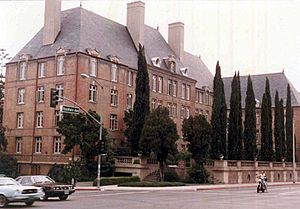 In 1984, residents in West Hollywood organized to maintain rent control. When Los Angeles County began planning to discontinue rent controls, West Hollywood was a densely populated area of renters, many of whom would not be able to afford to keep up with the generally rapid raises in rent in the Los Angeles area. A tight coalition of seniors, Jews, gays and renters were greatly assisted by the Coalition for Economic Survival (CES)and they swiftly voted to incorporate as the "City of West Hollywood". West Hollywood then immediately adopted one of the strongest rent control laws in the nation.

Alta Loma Road is home to the Sunset Marquis Hotel with its famous 45-person Whisky Bar and NightBird Recording Studios, an underground music production facility. Alta Loma Road was one of the main locations for the film Perfect.

The western stretch of Melrose Avenue, between Fairfax Avenue and Doheny Drive, is notable for its trendy clothing boutiques, interior design shops, restaurants and antique stores. The west end of Melrose Avenue, near the Pacific Design Center, is especially known for its exclusive furniture.

The area around Fountain Avenue, Harper Avenue and Havenhurst Drive contains a high concentration of landmark 1920s Spanish Revival and Art Deco apartment buildings by such noted architects as Leland Bryant. This historic district has been home to many celebrities and at one time the Sunset Tower at 8358 Sunset Boulevard was home to Frank Sinatra, Errol Flynn, the Gabor sisters, John Wayne and Howard Hughes. 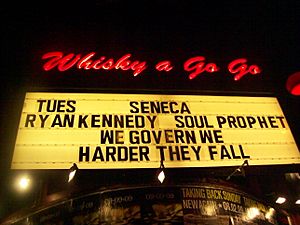 Whisky a Go-Go on the Sunset Strip

Notable business and attractions in West Hollywood include:

The West Hollywood Halloween Carnival is an event that takes place annually on October 31. The largest Halloween street party in the United States (spanning over 1 mile (1.6 km) of Santa Monica Boulevard from La Cienega Boulevard on the East to Doheny and the Beverly Hills border on the West), the 2007 Carnival was reported to have more than 350,000 people in attendance, with some traveling from other countries specifically for the event.

Christopher Street West is an LGBT pride parade and festival that was first held in June 1970 in Hollywood to commemorate the first anniversary of the Stonewall Riots in New York. After incorporation, the event moved to West Hollywood and is typically held the second weekend in June.

One City One Pride is an LGBT Arts Festival held during the month of June in West Hollywood.

The West Hollywood Book Fair has been held in the fall since 2001. Past participants have included Andrew McCarthy, Deepak Chopra, and Rocco DiSpirito.

The Oscars is a major event in the city with a majority of the large Academy Award party venues being located in the city. Many streets are closed and traffic swells on this day each year.

The City of West Hollywood sponsors an animal walk and pet appreciation days throughout the year, which have in the past featured pet psychics and dog activities. During Halloween the week prior to October 31, animals can participate in a costume contest in West Hollywood Park. West Hollywood is in close proximity to Runyon Canyon Park's hiking trail and dog park in Hollywood.

The Elton John AIDS Foundation Academy Awards Party has traditionally been held at the Pacific Design Center. It is a multimillion-dollar fundraiser for the foundation.

The issue of Paparazzi chasing celebrities is raised regularly and the city participates in meetings with other nearby municipalities such as Beverly Hills and Los Angeles to discuss the problem and possible actions to better control the activity. The epicenter of the Thirty Mile Zone lies just blocks to the south of the city, and is the basis for the name of TMZ on TV, a paparazzi footage-based program. TMZ moved their operations from Sunset and Crescent Heights Boulevards to Los Angeles.

Actor Drew Barrymore grew up on Poinsetta Place until the age of 7, when she moved to Sherman Oaks; she moved back to West Hollywood at the age of 14.

There were 23,120 households out of which 5.8% had children under the age of eighteen, 16.4% were married couples living together, 4.4% had a female householder with no husband present, and 77.5% were non-families. 60.5% of all households were made up of individuals, and 12.0% included someone living alone who was 65 years of age or older. The average household size was 1.53, and the average family size was 2.50.

All content from Kiddle encyclopedia articles (including the article images and facts) can be freely used under Attribution-ShareAlike license, unless stated otherwise. Cite this article:
West Hollywood, California Facts for Kids. Kiddle Encyclopedia.