The Fairfax District is a 1.23-square-mile neighborhood in the Central Los Angeles region of the city of Los Angeles, California.

Historically the Fairfax District has been a center of the Jewish community in Los Angeles. It is known for the Farmer's Market, The Grove, CBS Television City broadcasting center, the Los Angeles Museum of the Holocaust in Pan Pacific Park, and Fairfax Avenue restaurants and shops.

The median age for residents was 33, a general average within Los Angeles. The percentage of residents aged 65 and older was among the county's highest.

Fifty-four percent of Fairfax residents aged 25 and older had earned a four-year degree by 2000, a high figure for both the city and the county.

The median yearly household income in 2008 dollars was $65,938, average in comparison to the rest of Los Angeles. The average household size of two people was low for the city of Los Angeles. Renters occupied 71.5% of the housing stock, and house- or apartment owners 28.5%.

Historically, the Fairfax District has been a center of the Jewish community in Los Angeles, after the earlier Boyle Heights period, which was home to largest Jewish community west of Chicago in the 1920s and 1930s.

In 1935, there were four synagogues in the Fairfax District; by 1945, there were twelve. After World War II, more Jews began to populate the area. As more families moved in, religious schools and a Jewish Community Center sprang up. In 1974, Bet Tzedek Legal Services - The House of Justice, a legal aid charity, opened its doors across from the Farmers Market. From the 1950s to the 1970s, the Fairfax District was the center of Jewish life in Los Angeles. Recently arrived Jewish immigrants from Israel and Russia gave the area a cosmopolitan air. While this area of Los Angeles is still home to a Jewish community, the center of Jewish life has shifted east to the Beverly-La-Brea/Hancock Park District and to the southwest to the Pico and Robertson District.

The Farmers Market at Fairfax Avenue and 3rd Street still retains a 1930s atmosphere, with open-air vegetable stalls and cafes, and many Jewish residents of the area still frequent the market as part of their shopping or kibbitzing routine. The Grove, a commercial retail and entertainment center, opened in 2002 next to the Farmer's Market, and both now comprise one of the most popular destinations in Los Angeles for tourists and locals.

The intersection of Fairfax Avenue and Beverly Boulevard is officially recognized as Raoul Wallenberg Square, in honor of the Swedish diplomat who saved thousand of Hungarian Jews from deportation to Nazi death camps. The Los Angeles Museum of the Holocaust is located nearby, within Pan Pacific Park. 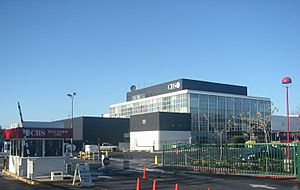 CBS Television City was built in 1952 on the former site of Gilmore Stadium at Fairfax Avenue and Beverly Boulevard. The facility has been used to tape several shows both for CBS and other entities, the most notable being The Price is Right, which has shot in Studio 33 (later renamed for the game show's longtime host, Bob Barker) continuously since 1972.

The schools within Fairfax include:

All content from Kiddle encyclopedia articles (including the article images and facts) can be freely used under Attribution-ShareAlike license, unless stated otherwise. Cite this article:
Fairfax District, Los Angeles Facts for Kids. Kiddle Encyclopedia.