Plan of Boyle Heights in 1877, with the Los Angeles River across the center
and Los Angeles city in the background

In the 1950s, Boyle Heights was racially and ethnically diverse, with Jews, Latinos (mainly Chicanos), various sectarian Spiritual Christians from Russia, Yugoslav (Serbian and Croatian) immigrants, Portuguese people, and Japanese Americans living in the neighborhood. Bruce Phillips, a sociologist who tracked Jewish communities across the United States, said that Jewish families left Boyle Heights not because of racism, but instead because of banks redlining the neighborhood (denying home loans) and the construction of several freeways through the community, which led to the loss of many houses.

As of the 2000 census, there were 92,785 people in the neighborhood, which was considered "not especially diverse" ethnically, with the racial composition of the neighborhood at 94.0% Latino, 2.3% Asian, 2.0% White (non-Hispanic), 0.9% African American, and 0.8% other races. The median household income was $33,235, low in comparison to the rest of the city. The neighborhood's population was also one of the youngest in the city, with a median age of just 25.

As of 2011, 95% of the community was Hispanic and Latino. The community had Mexican Americans, Mexican immigrants, and Central American ethnic residents. Hector Tobar of the Los Angeles Times said, "The diversity that exists in Boyle Heights today is exclusively Latino".

Latino communities These were the ten cities or neighborhoods in Los Angeles County with the largest percentage of Latino residents, according to the 2000 census: 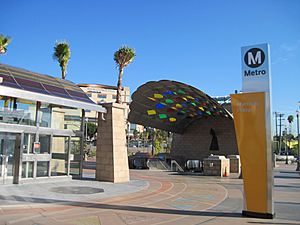 The Mariachi Plaza station, 2009, one of two underground stations in Boyle Heights

The emergence of Latino politics in Boyle Heights influenced the diversity in the community. First and foremost, Boyle Heights was a predominantly Jewish community with “a vibrant, pre-World War II, Yiddish-speaking community, replete with small shops along Brooklyn Avenue, union halls, synagogues and hyperactive politics … shaped by the enduring influence of the Socialist and Communist parties” (Burt, 22) before Boyle Heights became predominantly associated with Mexicans/Mexican Americans. The rise of the socialist and communist parties increased the people’s involvement in politics in the community because the “liberal-left exercised great influence in the immigrant community” (Burt, 22-23). Even with an ever-growing diversity in Boyle Heights, “Jews remained culturally and politically dominant after World War II”(Burt, 23). However, as the Jewish community was moving westward into new homes, the largest growing group, Latinos, were moving into Boyle Heights because to them this neighborhood was represented as upward mobility. With Jews and Latinos both in Boyle Heights, these men part of the Jewish Community Relations Council (JCRC); Louis Levy, Ben Solnit, Pinkhas Karl, Harry Sheer, and Julius Levitt helped to empower the Latinos who either lived among the Jewish people or who worked together in the factories. The combination of Jewish people and Latinos in Boyle Heights symbolized a tight unity between the two communities. The two races helped each other in order to elect Roybal into city council against his opponent Councilman Christensen; with the help from the Community Service Organization (CSO). In order for Roybal to win a landslide victory over Christensen, “the JCRC, with representation from business and labor leaders, associated with both Jewish left traditions, had become the prime financial benefactor to CSO … labor historically backed incumbents … [and] the Cold War struggle for the hearts and minds of minority workers also influenced the larger political dynamic”(Burt, 26).

In the 1947 election, Roybal lost and then Saul Alinsky; well-known Chicago-Jewish community activist and his company, the Industrial Areas Foundation (IAF) garnered support from the Mexican Americans in order for Roybal to win the 1949 election(Bernstein, 243). When Edward Roybal had just started as the city of Los Angeles’ new city councilman in 1949, he experienced racism when trying to buy a home for his family. The real estate agent told him that he could not sell to Mexicans, and from then on Roybal’s first act as councilman was to protest racial discrimination and to create a community that represented inter-racial politics in Boyle Heights. The Community Service Organization (CSO) helped Roybal win the election and to increase the multi-racial involvement in Boyle Heights(Bernstein, 224). Therefore, Roybal’s involvement in City Council affected how Latino politics went further on during Bradley’s term and for future political leaders coming from Boyle Heights.

This Latino-Jewish relationship shaped politics because when Mayor Villaraigosa became mayor of Los Angeles in 2005, and “not only did he have ties to Boyle Heights, but he was elected by replicating the labor-based, multicultural coalition that Congressman Edward Roybal assembled in 1949 to become Los Angeles’s first city council member of Latino heritage”(Burt, 23). Furthermore, the Vladeck Center (named after Borukh Charney Vladeck) contributed to the community of Boyle Heights in a big way because it was not just a building, it was “a venue for a wide range of activities that promoted Jewish culture and politics”(Burt, 22). This center will be forever known as the building place where coalition politics took place in Boyle Heights, along with the Catholic Dolores Mission center.

Boyle Heights' relation to other places, not necessarily contiguous:

All content from Kiddle encyclopedia articles (including the article images and facts) can be freely used under Attribution-ShareAlike license, unless stated otherwise. Cite this article:
Boyle Heights, Los Angeles Facts for Kids. Kiddle Encyclopedia.