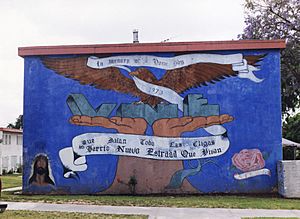 Mural at one of the main entrances to Estrada Courts.

Estrada Courts is a low-income housing project in the Boyle Heights area of Los Angeles, California.

Estrada Courts was constructed in 1942-1943, during the World War II housing shortage in Southern California, which resulted from the war-time boom in war-industry work, followed by the return of servicemen to the region and the Bracero program.

Estrada Courts is well known for its murals, which reflect the Chicano barrio culture and traditions of the area.

The murals Dreams of Flight, Untitled by Daniel Haro (1983), and Untitled by Steve Delgado (1973) are featured prominently in an episode of the television show Robbery Homicide Division-City of Strivers from November 8, 2002.

All content from Kiddle encyclopedia articles (including the article images and facts) can be freely used under Attribution-ShareAlike license, unless stated otherwise. Cite this article:
Estrada Courts Facts for Kids. Kiddle Encyclopedia.