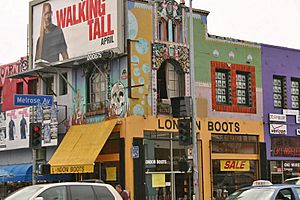 A view of a part of the eastern end of the Melrose Avenue District in April 2004.

Its most famous section, known as the Melrose District, is the West End through West Hollywood and Hollywood.

At the corner of Fairfax and Melrose is Fairfax High School, which marks the start of the Fairfax District.

One of the most famous landmarks located on Melrose Avenue is Paramount Pictures.

The eastern end of the district, which runs from Fairfax to Highland Avenue, became a popular underground and new wave shopping area in the early 1980s. Pioneered by adventurous independent retailers and restaurateurs, Melrose Avenue captured the global imagination as the birthplace of Southern California's New Wave and Punk cultures. Rapid notoriety quickly lured movie stars, moguls, and style seekers, leading the press to dub Melrose Avenue "the new Rodeo Drive." Ready for its close-up, the avenue enjoyed its share of TV and movie cameos, and appeared regularly on Jay Leno's "Jaywalking" segments of The Tonight Show With Jay Leno, in addition to pop culture gems like Entourage and LA Ink.

As a constantly evolving merchant district, it has featured stores such as Harvey's On Melrose Golden Girls Rattan Furniture. They all closed several years ago, Harvey's has made a come back after 20 years but on Beverly the new Melrose while The Burger That Ate L.A., a landmark fast food stand, was in recent years replaced with a Starbucks. The original Johnny Rockets opened in this end of Melrose in 1986. Long-term stakeholders like The Groundlings, l.a.Eyeworks, Angeli Caffe and Sportie LA have shown continued dedication to the community. In 2005, musician and director Joe Hahn, member of the rock band Linkin Park, opened his concept retail store SURU on the 7600 block of Melrose. Canadian designer John Fluevog opened on Melrose in 2003. As one of the city's most walking-friendly neighborhoods, this must-see destination has maintained its reputation for an original, alternative and independent experience for more than three decades.

Since 1997, the Melrose Trading Post outdoor flea market has created opportunities for Fairfax High School and the surrounding neighborhood. Every Sunday 250+ local vendors, collectors, artisans, and artists gather in the parking lot on the corner of Melrose and Fairfax Avenues to celebrate the thriving community culture. Food vendors and live music round out this weekly local event hosted by the Greenway Arts Alliance. Money raised by this nonprofit organization from the low-cost patron admission and vendor booth fees fuel a thriving arts education program on the FHS campus called, Institute for the Arts at Greenway.

Another view of Melrose Avenue

At the corner of Highland and Melrose is what has been described by the Los Angeles Times as the "boss of LA's Italian dining scene", Osteria Mozza (See Los Angeles Times, Thursday, August 7, 2007, pg. E46), which marks the eastern end of the Fairfax District.

North of the intersection with La Cienega Boulevard is Melrose Place, a branch of the main avenue made famous thanks to the soap opera of the same name. However, in reality, Melrose Place features no residences but has historically been home to antique shops, boutiques and salons.

The area of Melrose Avenue that intersects La Cienega Boulevard and its satellite streets is part of the La Cienega Design Quarter. Its shops and galleries house many antiques, furniture, rugs, accessories and art.

All content from Kiddle encyclopedia articles (including the article images and facts) can be freely used under Attribution-ShareAlike license, unless stated otherwise. Cite this article:
Melrose Avenue Facts for Kids. Kiddle Encyclopedia.