Marc Jacobs (born April 9, 1963) is an American fashion designer. He is the head designer for his own fashion label, Marc Jacobs, and formerly Marc by Marc Jacobs, a diffusion line, which was produced for approximately 15 years having been discontinued after the 2015 fall/winter collection. At one point there were over 200 retail stores in 80 countries. He was the creative director of the French design house Louis Vuitton from 1997 to 2014. Jacobs was on Time magazine's "2010 Time 100" list of the 100 most influential people in the world, and was #14 on Out magazine's 2012 list of "50 Most Powerful Gay Men and Women in America". He was married on April 6, 2019 to his long time partner, Charly Defrancesco.

Jacobs was born to a non-observant Jewish family in New York City. When he was seven, his father, an agent at the William Morris Agency, died. As a teenager, he went to live with his paternal grandmother on the Upper West Side, in an apartment in the Majestic on Central Park West.

He attended the High School of Art and Design and studied at the Parsons School of Design in New York. While at Parsons in 1984, he won the Perry Ellis Gold Thimble Award, Chester Weinberg Gold Thimble Award, and Design Student of the Year. In 1987 he became the youngest designer ever to receive the Council of Fashion Designers of America's Perry Ellis Award for New Fashion Talent. He also won the Women's Designer of the Year award from the Council of Fashion Designers of America in 1993.

At age 15, Jacobs worked as a stockboy at Charivari, a now-defunct avant-garde clothing boutique in New York City. While still at Parsons, he designed and sold his first line of hand-knit sweaters. He also designed his first collection for Reuben Thomas, Inc., under the Sketchbook label. With Robert Duffy, Jacobs's creative collaborator, and business partner since the mid-1980s, he formed Jacobs Duffy Designs.

In 1986, backed by Onward Kashiyama USA, Inc., Jacobs designed his first collection bearing the Marc Jacobs label. In 1987, he was the youngest designer to have ever been awarded the fashion industry's highest tribute, the Council of Fashion Designers of America's Perry Ellis Award for "New Fashion Talent". In 1988, Jacobs and Duffy joined the women's design unit of Perry Ellis as creative director/vice president and president, respectively, following the death of its namesake and founder. In addition, Jacobs oversaw the design of the various women's licensees. In 1992, the Council of Fashion Designers of America awarded Jacobs with The Women's Designer of the Year Award. In the same year, he designed a "grunge" collection for Perry Ellis, leading to his dismissal.

In the fall of 1993, Jacobs Duffy Designs Inc. launched their own licensing and design company, Marc Jacobs International Company, L.P. In 1994, Jacobs produced his first full collection of menswear. In 1997, Jacobs was appointed Louis Vuitton's creative director, where he created the company's first ready-to-wear clothing line. Jacobs has collaborated with many popular artists for his Louis Vuitton collections, including Stephen Sprouse, Takashi Murakami and most recently American artist Richard Prince and rapper Kanye West. 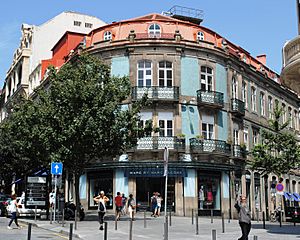 Marc by Marc Jacobs in Porto.

In the spring of 2001, Jacobs introduced his secondary line, Marc by Marc Jacobs. In 2005, Look was the Marc by Marc Jacobs ready-to-wear license holder in Japan with retail value of €50 million. In 2006, Jacobs started a new line of body-splash fragrances in ten-ounce bottles which are distributed by Coty. First being sold only in perfume boutiques, they have become more and more popular. In 2007 filmmaker Loïc Prigent released a documentary film about Jacobs entitled Marc Jacobs and Louis Vuitton. In February 2008, Jacobs was accused of plagiarizing a scarf design created in the 1950s by Swedish designer Gösta Olofsson. Jacobs settled the matter by offering monetary compensation to Olofsson's son. In 2009, Jacobs launched a shirt, sold at his stores, demanding the legalization of gay marriage. In May 2009, Jacobs co-hosted, with fashion model Kate Moss, a "model and muse"-themed gala for the New York City Metropolitan Museum of Art's Costume Institute.

In February 2010, Jacobs sued Ed Hardy for infringing on the designs of one of his embroidered handbags. In the course of the Mercedes-Benz Berlin Fashion Week in July 2011 Jacobs was the patron of the young talent award "Designer for Tomorrow by Peek & Cloppenburg". The five finalists were selected by Jacob and the juryboard and received a personal coaching by Jacobs. The juryboard and Jacobs appointed the winner of 2011 during the DfT award show. In August 2011, it was reported that Jacobs may succeed John Galliano as creative director of Christian Dior. According to The Daily Telegraph, Jacobs "firmly laid to rest rumours that he was to move to Christian Dior" in January 2012, but rumours prevail.

In February 2013, Jacobs was named the new creative director for Diet Coke. In honor of the brand's 30th anniversary, Jacobs would spend one year where he was slated to give the brand a "stylish and light-hearted" makeover. In March 2013, the New York Daily News revealed that the "faux fur" used in many Marc Jacobs garments is actually the fur from raccoon dogs from China.

In October 2013, after the Spring/Summer 2014 show, it was revealed that Marc Jacobs would leave Louis Vuitton to focus on his own line.

On January 9, 2014 it was announced that Jacobs's new Spring/Summer collection would feature actress/singer Miley Cyrus, photographed by David Sims.

On February 26, 2014, it was announced that actress Jessica Lange would be the new face of Marc Jacobs Beauty. In addition, it was announced that Lange would be featured in the brand's Summer/Fall print-ad campaign photographed by David Sims, and would also star in a short campaign film directed by Jacobs, to start streaming online May 5, 2014. Previously, Jacobs had dressed and interviewed Lange for Love Magazine's fifth anniversary issue, and had her provide a spoken-word version of "Happy Days Are Here Again" as the soundtrack for his Autumn/Winter 2014 show.

On August 26, 2019, Jacobs was presented with MTV's first "Fashion Trailblazer Award" at the Video Music Awards, in partnership with the Council of Fashion Designers of America.

In September 2020, Jacobs released Heaven, a polysexual line aimed at a younger audience while blurring gender boundaries. All of the garments incorporated brand signatures to celebrate its history, while giving new context towards a newer, younger audience. The campaign also featured young rising stars and trend-setters, such as beabadoobe and Iris Law. 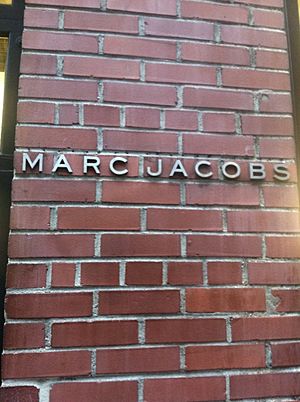 In March 2015, Jacobs announced the end of his secondary brand Marc by Marc Jacobs in order to focus on the development of his main label and to target to a more luxury-oriented audience.

Jacobs has an ongoing project entitled, "Protect The Skin You're In" to raise awareness about melanoma; all sales benefit research at the NYU Langone Medical Center. Some of the celebrities that have posed are Miley Cyrus, Eva Mendes, Kate Upton, Victoria Beckham, Heidi Klum, Hilary Swank, Cara Delevingne, and Naomi Campbell.

On April 4, 2018, Jacobs proposed to his then-boyfriend, Charly Defrancesco, via a flashmob while in a Chipotle restaurant. The flashmob did a routine to the song "Kiss" by Prince. They were married in a lavish wedding held in New York City on April 7, 2019.

The couple purchased a home in Rye, New York in April 2019. The Westchester home was designed by Frank Lloyd Wright and is known as the Max Hoffman House.

All content from Kiddle encyclopedia articles (including the article images and facts) can be freely used under Attribution-ShareAlike license, unless stated otherwise. Cite this article:
Marc Jacobs Facts for Kids. Kiddle Encyclopedia.