South by Southwest facts for kids

South by Southwest (SXSW) is a set of festivals and conferences. They are about movies, interactive media, and music. It takes place every year in March in Austin, Texas, United States. It began in 1987. It has continued to grow in both scope and size every year.

South by Southwest is run by the company SXSW, Inc. 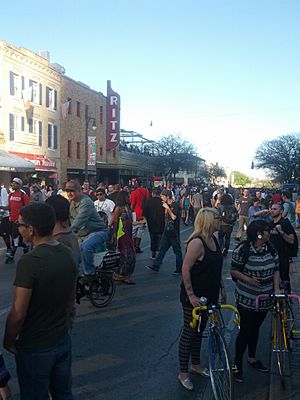 A view of 6th Street in downtown Austin, Texas, during SXSW 2013

SXSW Music is the largest music festival in the world. It had more than 2,000 performances in 2014.

Bands must pay for their own travel and lodging at the event. All performers get a cash payment ($100 for solo musicians or $250 for bands) or a wristband that gives them access to all music events.

In 2015, the SXSW Film Festival showed 150 feature movies and 106 short movies. They were selected from 7,361 submissions. Past movies that premiered at SXSW include Furious 7, Neighbors, Chef, 21 Jump Street, The Cabin in the Woods, Bridesmaids and Insidious, and the TV series Girls, Silicon Valley and Penny Dreadful.

Although the film festival often shows independently produced movies, studios have often shown their comedies there before they are released. They do this to get an idea of how popular the movie will be in theaters.

SXSW Interactive is about new technology. The festival includes a trade show, speakers, parties, and a startup accelerator. According to a festival organizer Louis Black, SXSW Interactive "has probably been the biggest of its kind in the world" since 2007.

All content from Kiddle encyclopedia articles (including the article images and facts) can be freely used under Attribution-ShareAlike license, unless stated otherwise. Cite this article:
South by Southwest Facts for Kids. Kiddle Encyclopedia.