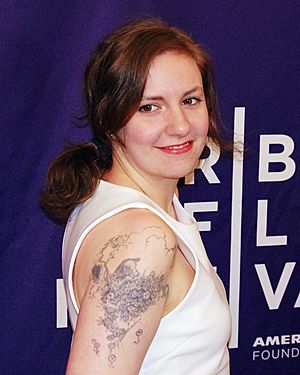 Lena Dunham (born May 13, 1986, New York City) is an American actress. She works mainly in television programs. She created and stars in the television series Girls. She has won several Golden Globe Awards for this.

Dunham studied creative writing at Oberlin College. She often talks about this in her work. In 2012, Dunham she started dating Jack Antonoff. She is a feminist.

All content from Kiddle encyclopedia articles (including the article images and facts) can be freely used under Attribution-ShareAlike license, unless stated otherwise. Cite this article:
Lena Dunham Facts for Kids. Kiddle Encyclopedia.