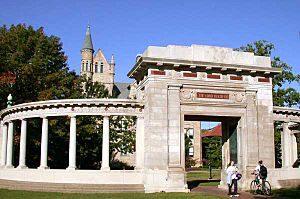 Students passing through the Memorial Arch in front of Peters Hall. The arch is dedicated to the memory of 15 missionaries of the Oberlin Band who were killed in the Boxer Rebellion.

Oberlin College is a private liberal arts college in Oberlin, Ohio. It was the first college in the United States to accept African-American students as well as female students. It is also known for the Oberlin Conservatory of Music. Oberlin is a member of the Great Lakes Colleges Association and the Five Colleges of Ohio consortium.

Oberlin College and the town of Oberlin were started together in 1833. In 1837, the college began a program of coeducation; admitting female students. In 1835, the college began a policy of interracial education. The Board of Trustees voted to allow black students at a time when there was only one black person living in the county. The first black student was a former slave, James Bradley from Cincinnati. The first building was Tappan Hall, named for Arthur Tappan of New York City. It was both a dormitory and classroom. In 1903 Memorial Arch was constructed. It was to honor those from Oberlin college who were killed in the Boxer Rebellion in China. 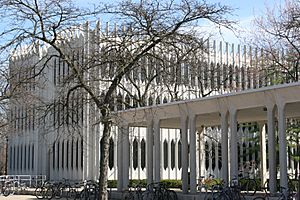 Conservatory of Music at Oberlin College

In 1865, Oberlin started its music program. A music conservatory is on the college campus. Students benefit from over 500 performances yearly, most free of charge, with concerts and recitals almost daily. The Conservatory was one of the recipients of the 2009 National Medal of Arts.

The Allen Memorial Art Museum is on the college campus. It holds an art collection showing the history of Art that has 12,000 pieces. It also has a unique art rental program. At the beginning of every semester, students camp out in front of the north gate to get first pick of artwork by artists including Renoir, Dalí, and Picasso.

All content from Kiddle encyclopedia articles (including the article images and facts) can be freely used under Attribution-ShareAlike license, unless stated otherwise. Cite this article:
Oberlin College Facts for Kids. Kiddle Encyclopedia.