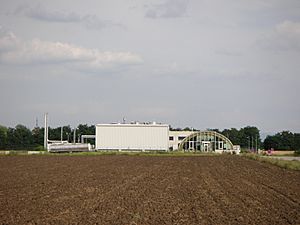 Biodiesel refinery in Austria, near fields that can grow oilseed 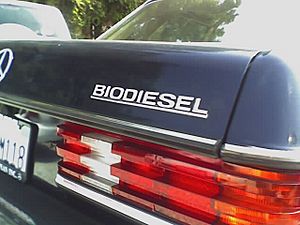 Older diesel Mercedes are popular for running on biodiesel 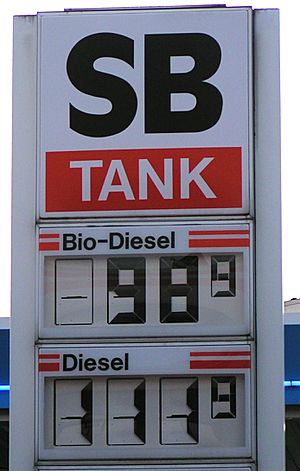 In some countries biodiesel is less expensive than conventional diesel

Biodiesel is a type of fuel prepared by changing vegetable oil, animal fat, special types of algae and possibly even sewage. It is considered a type of renewable energy, since it all comes from living plants and animals. It can be used to power an engine, usually for vehicles, including airplanes. It replaces diesel that comes from petroleum, a type of fossil fuel.

Biofuel prepared from biomass is different since it does not start from oil and uses a different chemical process to make the fuel.

Biodiesel is much cleaner and has less pollution than diesel fuel made from fossil fuels. It also acts as a solvent (like soap). In fact, it cleans the engine so much that it might pull out old dirt in the engine and clog up the filters. After the filters are replaced then it is fine.

In the United States and several other places, new laws say that regular diesel fuel must be low in sulfur. This gets rid of pollution, especially acid rain, but it also makes the fuel less slippery. Adding in biodiesel helps keep the fuel slippery and the engine running smoothly.

Most biodiesel comes from plants. This means a lot of farmland is used to grow plants for fuel instead of for feeding animals and people. There are scientists, chemical engineers and agricultural engineers who are studying ways to use algae and saltwater plants to make oil. This would not take away farmland that is used to grow food. Also, some biodiesel comes from waste oil and waste animal fat, that would otherwise be thrown away. NASA is testing biodiesel made from chicken fat to fuel their airplanes.

All diesel fuel has a problem starting an engine in cold weather, but biodiesel has more of a problem. This can be solved by mixing biodiesel and regular diesel at the right mixture. Or by heating the fuel before it is used by the engine. There might be a heater built into the vehicle for this.

Most biodiesel is made from oilseed. Oilseed is any type of seed that has enough oil in it to be useful in making vegetable oil.

In Brazil, castor beans are the best plants to make biodiesel. In Germany biodiesel is usually made from rapeseeds. Soybeans and sunflower seeds are commonly used in the United States. In Thailand, the raw material will most likely come from palm oil, coconut oil, Jatropha oil, and animal fat. Jatropha trees also grow in India and Africa.

Some people make their own biodiesel by converting old oil that is used in restaurants to fry foods. The exhaust smells a bit like french fries.

Someday algae might be used to make more biodiesel than is made today with vegetable oil. Algae can be grown in places that food cannot be grown in, so it would not take food away from people. But right now it is still too expensive, but scientists are looking at ways to make the process better.

All content from Kiddle encyclopedia articles (including the article images and facts) can be freely used under Attribution-ShareAlike license, unless stated otherwise. Cite this article:
Biodiesel Facts for Kids. Kiddle Encyclopedia.