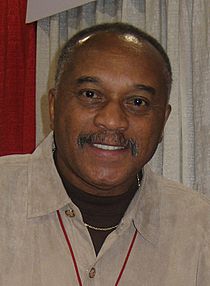 Tommie C. Smith (born June 6, 1944) is an American former track and field athlete. He won the gold medal in the 200 meter sprint at the 1968 Summer Olympics in Mexico City. As well as winning the gold medal, he was known for performing a famous Black Power salute with fellow American John Carlos on the medal podium. Smith did this as a protest against racism towards African-Americans. Smith and Carlos were also supported by Australian silver medalist Peter Norman.

Smith was born in Clarksville, Texas. His autobiography, Silent Gesture, was published in 2007.

All content from Kiddle encyclopedia articles (including the article images and facts) can be freely used under Attribution-ShareAlike license, unless stated otherwise. Cite this article:
Tommie Smith Facts for Kids. Kiddle Encyclopedia.