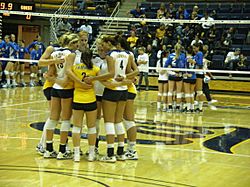 SJSU women's volleyball at University of California at Berkeley(UCB).

San Jose State Spartans is the name of the different sport teams at San Jose State University. The teams compete in the Western Athletic Conference (WAC) at the NCAA Division I level. (Football Bowl Subdivision which used to be known as Division 1-A for football.) The university has taken part in athletics since its baseball team began in 1890.

San Jose State University sports teams have won in the NCAA in track and field, cross country running, golf, and boxing. By 2008, SJSU had won 10 NCAA team championships and 50 NCAA Division 1 champions. SJSU also has an international reputation for judo, winning 43 out of 46 collegiate national championships in the sport (by 2008).

People who once went to SJSU have won 18 Olympic medals (including seven gold medals) since the gold medal won by Willie Steel in track and field in the 1948 Olympics. These people have won medals in swimming, judo and boxing.

The track team coached by "Bud" Winter earned San Jose the nickname "Speed City," and has included Olympic medalists and social activists Lee Evans, John Carlos and Tommie Smith. Smith and Carlos are remembered for giving the raised fist salute from the medalist's podium during the 1968 Summer Olympic Games in Mexico City.

In 2008 head coaches from the men’s soccer, baseball, women’s gymnastics, and women’s golf programs had all been named the conference “Coach of the Year.”

As of 2009, San Jose State University competes at the Division 1 level in each of the following sports:

All content from Kiddle encyclopedia articles (including the article images and facts) can be freely used under Attribution-ShareAlike license, unless stated otherwise. Cite this article:
San Jose State Spartans Facts for Kids. Kiddle Encyclopedia.