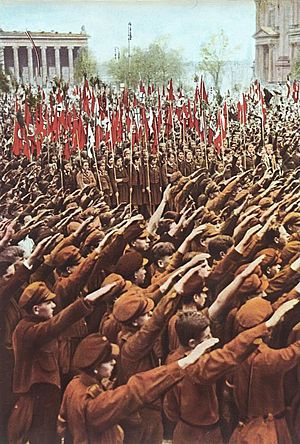 The Nazi salute or Hitler salute is a gesture that was used as a greeting in Nazi Germany. The salute is performed by extending the right arm in the air with a straightened hand. Usually, the person offering the salute would say "Heil Hitler!" (Hail Hitler!), "Heil, mein Führer!" (Hail, my leader!), or "Sieg Heil!" (Hail victory!).

It was adopted in the 1930s by the Nazi Party to show obedience to the party's leader, Adolf Hitler. It also gave honour to the German nation (and later the German war effort).

The salute was required for all civilians. It was mostly optional for military personnel who retained the traditional salute until shortly after the failed assassination attempt on Hitler on July 20, 1944.

Use of this salute is currently a criminal offense in Germany, Italy, Japan, the Czech Republic, Slovakia, Austria and Uzbekistan. In Switzerland, France, Canada, the Netherlands and Sweden, the salute is illegal hate speech if used for promoting Nazi ideology.

All content from Kiddle encyclopedia articles (including the article images and facts) can be freely used under Attribution-ShareAlike license, unless stated otherwise. Cite this article:
Nazi salute Facts for Kids. Kiddle Encyclopedia.