Karl Dönitz (16 September 1891 – 24 December 1980) was a German naval leader. He commanded the German Navy (Kriegsmarine) during the second half of World War II. Dönitz was also President of Germany for 23 days after Adolf Hitler's suicide. For his role in World War II, Dönitz was referred to as "der Löwe" (the Lion). 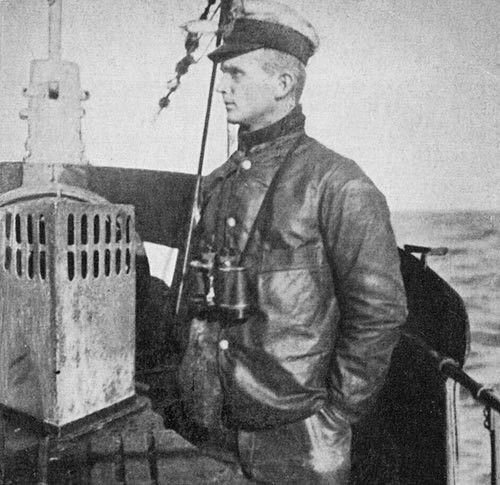 Karl Dönitz as Watch Officer of U-39

Dönitz was born in Berlin. He entered the Imperial German Navy in 1911. During World War I, he served on surface ships. Later he was transferred to submarines (U-boats). He remained in the navy after the war and rose through the ranks of the German Navy of the Weimar Republic (Reichsmarine) and the German Navy of the Third Reich (Kriegsmarine). He became a Großadmiral.

He served as Commander of Submarines. Later, he became Commander-in-Chief of the German Navy. He got this position, even though he never joined the Nazi Party. Under his command, the U-boat fleet fought the Battle of the Atlantic. He also served as Reichspräsident for 23 days after Adolf Hitler's suicide. He ended the war as a prisoner-of-war of the British.

After the war Dönitz was charged and convicted of "crimes against peace" and "war crimes" at the Nuremberg Trials. He served ten years in prison. He ordered the unrestricted submarine warfare which was done by Germany in the North Atlantic. With this, he caused Germany to be in breach of the Second London Naval Treaty of 1936. At his trial, evidence was shown that the Allies had acted similarly. For this reason, this breach of international law had no impact on his sentence. 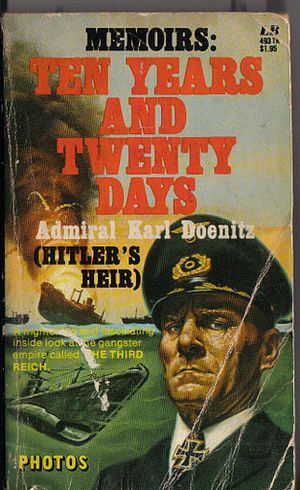 Cover of the first edition of Dönitz's memoirs in English, Ten Years and Twenty Days 1958

Dönitz was released on 1 October 1956 and retired to the small village of Aumühle in Schleswig-Holstein in northern West Germany. There, he worked on two books. His memoirs, Memoirs: Ten Years and Twenty Days, were released in Germany in 1958 and became available in an English translation the following year. This book recounted Dönitz's experiences as U-boat commander (10 years) and President of Germany (20 days). In it, Dönitz explains the Nazi regime as a product of its time. He likewise criticizes dictatorship as a fundamentally flawed form of government and blames it for many of the Nazi era's failings.

Dönitz's second book, My Ever-Changing Life is less known, perhaps because it deals with the events of his life before 1934. This book was first published in 1968. In 1973, he appeared in the Thames Television production The World at War, in one of his few television appearances.

On 27 May 1916, Dönitz married a nurse named Ingeborg Weber (1894–1962), the daughter of a German general. They had three children whom they raised as Protestant Christians. 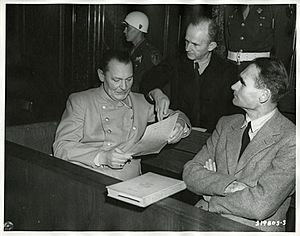 He lived out the rest of his life in relative obscurity in Aumühle, occasionally corresponding with collectors of German naval history, and died there of a heart attack on 24 December 1980. As the last German officer with the rank of Großadmiral (grand admiral), he was honoured by many former servicemen and foreign naval officers who came to pay their respects at his funeral on 6 January 1981.

He was buried in Waldfriedhof Cemetery in Aumühle without military honours, and soldiers were not allowed to wear uniforms to the funeral. Also in attendance were over 100 holders of the Knight's Cross of the Iron Cross.

All content from Kiddle encyclopedia articles (including the article images and facts) can be freely used under Attribution-ShareAlike license, unless stated otherwise. Cite this article:
Karl Dönitz Facts for Kids. Kiddle Encyclopedia.