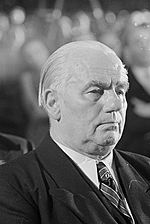 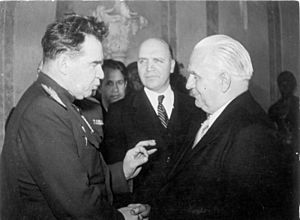 Friedrich Wilhelm Reinhold Pieck (3 January 1876 in eastern Guben (today Poland) - 7 September 1960 in Berlin) was an (East) German communist politician. He was a member of the Spartacus League. He was joint founder, and from 1946 to 1950 co-chairman of the Socialist Unity Party of Germany (SED, together with Otto Grotewohl), and from 1949 to his death in 1960 the first and only president of the GDR.

During the Weimar Republic he was a member of the Landtag of Prussia from 1921 to 1928, and afterwards a member of the Reichstag from 1928 to 1933, both on behalf of the Communist Party of Germany (KPD).

All content from Kiddle encyclopedia articles (including the article images and facts) can be freely used under Attribution-ShareAlike license, unless stated otherwise. Cite this article:
Wilhelm Pieck Facts for Kids. Kiddle Encyclopedia.