The political leadership of East Germany was in the hands of several offices.

Leaders of the Socialist Unity Party of Germany (SED) 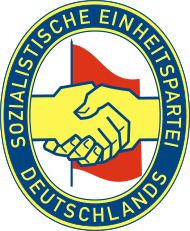 Logo of the Socialist Unity Party of Germany

On 1 December 1989, the People's Chamber removed the section of the East German Constitution granting the SED a monopoly of power—thus ending Communist rule in East Germany. Before the month was out, the SED transformed from a Leninist cadre party into a democratic socialist party, renaming itself first to Socialist Unity Party — Party of Democratic Socialism and later in the same year, to Party of Democratic Socialism (PDS). Hence, the party's subsequent leaders were no more leaders of East Germany than the leaders of other parties.

Heads of the military 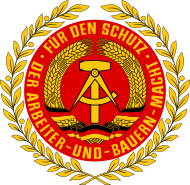 Coat of arms of the National People's Army

All content from Kiddle encyclopedia articles (including the article images and facts) can be freely used under Attribution-ShareAlike license, unless stated otherwise. Cite this article:
Leadership of East Germany Facts for Kids. Kiddle Encyclopedia.