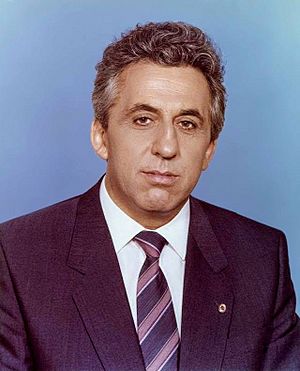 Egon Krenz (born 19 March 1937 in Kolberg) was a politician of the German Democratic Republic. He served in the East German Army, NVA (Nationale Volkes Armee), where he attained the rank of Unteroffizere (Corporal). He was a high-ranking member of the Socialist Unity Party of Germany. He was the successor to Erich Honecker as leader of East Germany from 18 October 1989 until 3 December 1989, for a few weeks. Later, he was sentenced to six and a half years in prison and released in 2003.

All content from Kiddle encyclopedia articles (including the article images and facts) can be freely used under Attribution-ShareAlike license, unless stated otherwise. Cite this article:
Egon Krenz Facts for Kids. Kiddle Encyclopedia.