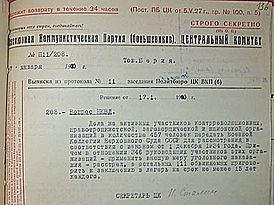 The Soviet Politburo passes a resolution to execute 346 "enemies of the CPSU and the Soviet Government" who led "counter-revolutionary, pro-trotskyist, plotting and spying activities", signed by secretary Stalin, 17 January 1940

In Communist parties the politburo (short for "political bureau") was the group of people that made all decisions of the party. The Central Committee elected its own members to the Politburo at meetings. The leader of the politburo was called the General Secretary, and this person was the most powerful person in the party.

All content from Kiddle encyclopedia articles (including the article images and facts) can be freely used under Attribution-ShareAlike license, unless stated otherwise. Cite this article:
Politburo Facts for Kids. Kiddle Encyclopedia.