Ulbricht played a leading role in the creation of the Weimar-era Communist Party of Germany (KPD). He was a member of both the Landtag of Saxony and the Reichstag during the Weimar Republic.

Some time after Hitler's rise to power Ulbricht fled to France and later to the Soviet Union. As leader of the communist Ulbricht Group he returned to Berlin on April 30, 1945. He was the first secretary of the Socialist Unity Party (SED), and leading East Germany from 1950 to 1971. From President Wilhelm Pieck's death in 1960, he was also the East German head of state until his own death in 1973.

Besides being a sports fanatic, Ulbricht considered himself an expert on architecture and urban planning, and was therefore responsible for the destruction of several ancient buildings in East Germany.

He was also involved in intellectual activities by writing a series of books about the history of the German labor movement. 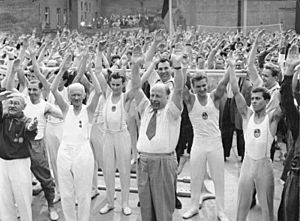 All content from Kiddle encyclopedia articles (including the article images and facts) can be freely used under Attribution-ShareAlike license, unless stated otherwise. Cite this article:
Walter Ulbricht Facts for Kids. Kiddle Encyclopedia.