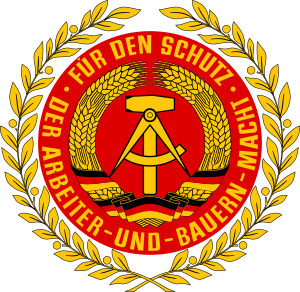 Insignia of the National People's Army

The NPA was founded on 1 March 1956. It developed from the Kasernierte Volkspolizei (Barracked People's Police), which was started in 1952. Serving with the army was voluntary at first. Conscription was introduced on 24 January 1962. Conscription was for male citizens between the ages of 18 and 26. If they were selected, they had to serve in the NPA for 18 months. The NVA was at its largest in 1987. It had about 175,000 soldiers at this time.

The NVA was modeled on Soviet military philosophy. Its leadership and operations were governed by the officer corp. The non-commissioned officer corps was limited in terms of authority and responsibility, unlike in the West German army. There were also political officers throughout the NVA, whose job it was to guarantee the loyalty of the military to the ruling political party.

The NVA was made up of four main branches:

The NVA also had a large number of reserve and paramilitary forces. These could be called to serve during a crisis.

All content from Kiddle encyclopedia articles (including the article images and facts) can be freely used under Attribution-ShareAlike license, unless stated otherwise. Cite this article:
National People's Army Facts for Kids. Kiddle Encyclopedia.