Kids Encyclopedia Facts
Not to be confused with "Unter der Linden," a poem by Walther von der Vogelweide. 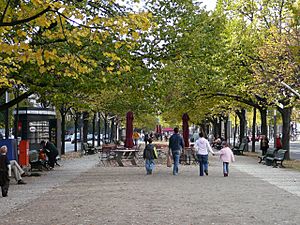 Unter den Linden ("under the linden trees") is a boulevard in the Mitte district of Berlin, the capital of Germany. It is named for its linden (lime in British English) trees that line the grassed pedestrian mall in the middle of the road

Unter den Linden runs east–west from the site of the former Stadtschloss royal palace at the Lustgarten park, where the demolished Palast der Republik used to be, to Pariser Platz and Brandenburg Gate. Eastward the boulevard crosses the river Spree near the Dom (Berlin Cathedral) and continues as Karl-Liebknecht-Straße. The western continuation behind Brandenburg Gate is Straße des 17. Juni. Major north–south streets crossing Unter den Linden are Friedrichstraße and Wilhelmstrasse. 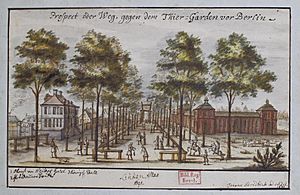 Unter den Linden at the heart of the historic section of Berlin developed from a bridle path laid out by Elector John George of Brandenburg in the 16th century to reach his hunting grounds in the Tiergarten. It was replaced by a boulevard of linden trees planted in 1647, stretching from the city palace to the gates of the city, by order of the “Great Elector” Frederick William. While the western part of the boulevard retained its character, the area around present-day Bebelplatz was changed after the Thirty Years' War and fortified. There are no trees.

By the 19th century, as Berlin grew and expanded to the west, Unter den Linden became the best-known and grandest street in Berlin. In 1851 the famous equestrian (horse-riding) statue of King Frederick the Great, designed by Christian Daniel Rauch, was put up on the centre strip. In the course of the building of the Nord-Süd-Tunnel for the Berlin S-Bahn in 1934/35 most of the linden trees were cut down and during the last days of World War II the remaining trees were destroyed or cut down for firewood. The present-day linden were replanted in the 1950s, they are affected by air pollution as well as by soil contamination.

Since 1937, the numbering has started at the Schlossbrücke (Palace Bridge), connecting Unter den Linden with the Lustgarten and Museum Island. The disputed replica of the Alte Kommandantur is No. 1, vis-à-vis the Zeughaus arsenal, the oldest building on Unter den Linden, built between 1695 and 1706, today the seat of the Deutsches Historisches Museum (No. 2). Buildings along the street include (from east to west) the Kronprinzenpalais (former palace of the Hohenzollern crown princes, No. 3), the Neue Wache war memorial built in 1817 (No. 4), considered by many to be Karl Friedrich Schinkel’s masterpiece. Furthermore, on Bebelplatz the Berlin State Opera (No. 7), coloquially called Lindenoper, St. Hedwig's Cathedral and the Altes Palais (No. 9), favoured residence of Emperor Wilhelm I; in the north the main building of the Humboldt University (No. 6) and House I of the Berlin State Library (No. 8). On the western end are the Russian Embassy (former Soviet Embassy, No. 63-65) the Hungarian Embassy (No. 76) at the corner of Wilhelmstrasse and finally the Hotel Adlon (No. 77) at the corner of Pariser Platz, which has been completely rebuilt on the site of the prewar hotel. Well-known statues of Alexander and Wilhelm von Humboldt in front of the university as well as of the Prussian generals Scharnhorst and Bülow also adorn the street.

All content from Kiddle encyclopedia articles (including the article images and facts) can be freely used under Attribution-ShareAlike license, unless stated otherwise. Cite this article:
Unter den Linden Facts for Kids. Kiddle Encyclopedia.