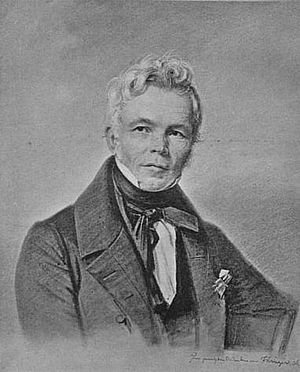 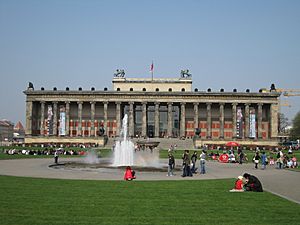 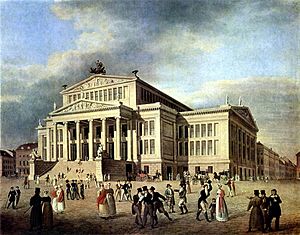 Karl Friedrich Schinkel (13 March 1781 – 9 October 1841) was a Prussian architect, city planner, and painter. He also designed furniture and stage sets. Schinkel was one of the most importat architects of Germany and designed both neoclassical and neogothic buildings.

Schinkel was born in Neuruppin, Brandenburg. When he was six, his father died in Neuruppin's disastrous fire. He became a student of architect Friedrich Gilly (1772–1800) and his father, David Gilly, in Berlin. He made a trip to Italy in 1805. Then he started to earn his living as a painter.

He worked for the stage and created in 1816 a star-spangled backdrop for the appearance of the "Königin der Nacht" in Wolfgang Amadeus Mozart's opera The Magic Flute. When he saw Caspar David Friedrich's painting Wanderer above the Sea of Fog at the 1810 Berlin art exhibition he decided that he would never reach such mastery of painting and turned to architecture.

After Napoleon's defeat, Schinkel worked at the Prussian Building Commission. In this position, he was not only responsible for reshaping the city of Berlin into a representative capital for Prussia, but also had to work projects in the expanded Prussian territories from the Rhineland in the west to Königsberg in the east.

From 1808 to 1817 Schinkel renovated and reconstructed Schloss Rosenau, Coburg, in the Gothic Revival style.

Schinkel's style was more influenced by Greek than by than Imperial Roman architecture. His most famous buildings are found in and around Berlin. These include Neue Wache (1816–1818), the Schauspielhaus (1819–1821) at the Gendarmenmarkt, which replaced the earlier theater that was destroyed by fire in 1817, and the Altes Museum (old museum, see photo) on Museum Island (1823–1830).

Schinkel, however, is famous as well for his theoretical work and his architectural drafts. Some of his merits are best shown in his plans for the transformation of the Athenian Acropolis into a royal palace for the new Kingdom of Greece and for the erection of the Orianda Palace in the Crimea. He also designed the famed Iron Cross medal of Prussia, and later Germany.

All content from Kiddle encyclopedia articles (including the article images and facts) can be freely used under Attribution-ShareAlike license, unless stated otherwise. Cite this article:
Karl Friedrich Schinkel Facts for Kids. Kiddle Encyclopedia.