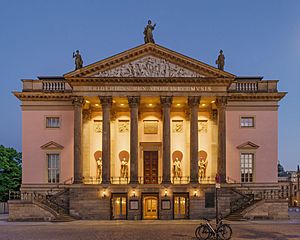 The Berlin State Opera, known in Germany as Staatsoper Unter den Linden is a world famous German opera company. Its permanent home is the Opera House on the Unter den Linden boulevard in Berlin.

The opera house was opened on 7 December 1742. It was the beginning of a 250-year co-operation between the Staatsoper and the orchestra called Berlin Staatskapelle. Famous conductors and composers associated with the opera house include Gaspare Spontini, Giacomo Meyerbeer and Richard Strauss.

On 18 August 1843 the Linden Opera was destroyed by fire. The new building was built a year later. It was called Königliches Opernhaus (Royal Opera House), and it opened with a performance of Meyerbeer's Ein Feldlager in Schlesien.

At the end of the 19th century and the beginning of the 20th century, the Royal Court Opera, Berlin, had many famous conductors. They included Felix von Weingartner, Karl Muck, Richard Strauss, and Leo Blech.

After the collapse of the German Empire in 1918, the Opera was renamed Staatsoper unter den Linden and the Königliche Kapelle became Kapelle der Staatsoper.

In the 1920s, Wilhelm Furtwängler, Erich Kleiber, Otto Klemperer, Alexander von Zemlinsky, Bruno Walter conducted. In 1925, Alban Berg's Wozzeck, was given its first performance conducted by Erich Kleiber with the composer in the audience.

After having had many repairs and improvements, the Linden Opera reopened in April 1928 with a new production of Die Zauberflöte. In the same year, the famous Russian bass Feodor Chaliapin and Serge Diaghilev's Ballets Russes with conductor Ernest Ansermet were guest performers. In 1930 Erich Kleiber conducted the first performance of Darius Milhaud's Christoph Columbus.

In 1934, when symphonic pieces from Alban Berg's Lulu were performed by Kleiber, the Nazis created a scandal and Kleiber had to go into exile.

When Hitler came to power all the Jews in the orchestra had to leave. Many went into exile, including the conductors Otto Klemperer and Fritz Busch. During the Third Reich, Robert Heger, Herbert von Karajan (1939-1945) and Johannes Schüler were the "Staatskapellmeister".

In 1945 The Lindenoper was once again destroyed on 3 February. The second rebuilding took a long time. From 1945, the opera company played in the former Admiralspalast (today's Metropoltheater). From 1949, the company served as state opera of the GDR. It moved back to its original home after the rebuilding in 1955. The newly rebuilt opera house was opened, again, with Wagner's Die Meistersinger von Nürnberg.

After the Berlin Wall was built in 1961, the Opera continued to perform music from the classical and romantic periods together with contemporary ballet and operas.

After the Germany Reunification, the Linden Opera had links again with the operatic world. In the 1990s, the opera was officially renamed "Staatsoper Unter den Linden".

In 1992, the Argentine-Israeli conductor Daniel Barenboim was appointed Music Director. In 2000, the orchestra (according to its official website) gave Barenboim the title "conductor for life." During the 2002 Festtage, he led a Wagner cycle in ten parts.

All content from Kiddle encyclopedia articles (including the article images and facts) can be freely used under Attribution-ShareAlike license, unless stated otherwise. Cite this article:
Berlin State Opera Facts for Kids. Kiddle Encyclopedia.