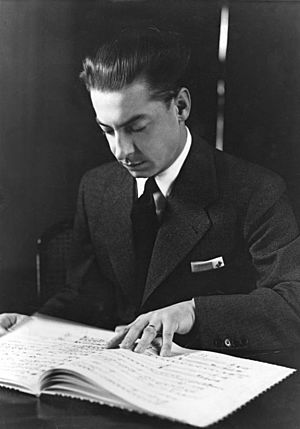 Herbert von Karajan (born Salzburg, Austria, 5 April 1908; died Salzburg 16 July 1989) was an Austrian conductor. He was probably the best-known conductor in the world during his time. He conducted the greatest orchestras, and made many wonderful recordings. He was the conductor of the Berlin Philharmonic for 35 years.

Herbert von Karajan was born in Salzburg. His name at first was Heribert Ritter von Karajan. In 1916, he went to study the piano at the Mozarteum in Salzburg. There he was told he should learn conducting. By 1929, he was conducting at the Festspielhaus, Salzburg and in 1934 he led the Vienna Philharmonic for the first time. He conducted regularly in Ulm and Aachen.

In 1937, Karajan first conducted the Berlin Philharmonic and the Berlin State Opera He was very successful when he conducted Tristan und Isolde. In 1938 a Berlin music critic called him Das Wunder Karajan (The Karajan miracle). He started to make recordings. However, one day in June 1939 he was conducting "Die Meistersinger" at Bayreuth in front of Hitler and his guests the King and Queen of Yugoslavia when he suddenly could not remember the music (he was conducting without the score). The singers stopped and the curtain came down. Hitler was very angry and said that Karajan would never conduct at Bayreuth again. This event may actually have helped his career after World War II. Many people who had worked for the Nazis and for Hitler were not allowed to work.

During the war, in 1942, Karajan married Anita Gütermann. She was the daughter of a rich man who had a business making sewing machines. His wife was partly Jewish. This caused the Nazi’s to talk about whether Karajan should still be allowed to conduct. By 1944, he was not in favour with the Nazis, but he was still conducting in Berlin. He left Berlin and went to Milan, Italy with his wife in February 1945. Karajan divorced Anita in 1958.

Although he was deposed after the war because of his Nazi connections, he started to conduct again in 1946.

Karajan gave his first concert after the war in 1946 in Vienna with the Vienna Philharmonic. He was banned again by the occupying Russians, but started conducting again the next year.

Karajan gave many concerts with the Vienna Symphony Orchestra for the Gesellschaft der Musikfreunde, Vienna. He conducted at La Scala in Milan for the 1948-49 season. From 1947, he made many recordings with the Philharmonia Orchestra in London and the Vienna Philharmonic in Vienna.

In 1951 and 1952, he conducted again at the Bayreuth Festspielhaus where he changed the seating plan for the orchestra that had been compulsory since Wagner made it in 1876.

His fame and personality

Herbert von Karajan had very good musicianship and memory. He conducted without a score in front of him, very often with his eyes closed. He is remembered for being very strict (like a dictator) and always insisting on having things the way he wanted. There are many stories about him that show this. He insisted on being paid very high fees. When he was being filmed conducting an orchestra, he wanted the cameras to show him all the time. When he conducted Wagner at the Metropolitan Opera, he made the stand for the conductor higher so that the audience could see him.

All content from Kiddle encyclopedia articles (including the article images and facts) can be freely used under Attribution-ShareAlike license, unless stated otherwise. Cite this article:
Herbert von Karajan Facts for Kids. Kiddle Encyclopedia.