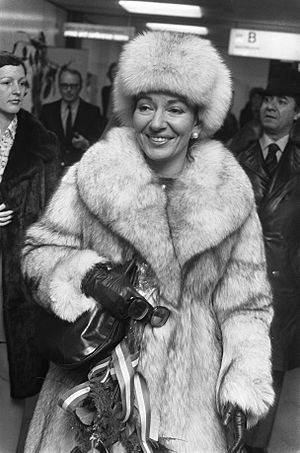 Maria Callas (December 3, 1923 – September 16, 1977) was a Greek soprano. She was one of the most famous and most controversial opera singers of the 20th century. She had a very distinctive voice of great range, power and agility and was a singer-actress of great dramatic intensity. She was dubbed La Divina (The Divine One) by her admirers. She was mainly associated with the Italian repertoire, particularly Bellini's Norma, Donizetti's Lucia di Lammermoor, Verdi's La traviata and Puccini's Tosca.

Born Maria Kalogeroupoulou in New York City, to Greek parents, she returned to Greece in 1937, with her mother and older sister. There, she studied singing with Elvira de Hidalgo, and made her debut while still a teenager with the Athens Opera in 1939.

During a short return to America to visit her father in 1945, she auditioned at the Metropolitan Opera without success. Her first major break came with her Italian debut in Verona in 1947, as La Gioconda. There, she met conductor Tullio Serafin who became her mentor and guided her towards the bel canto repertoire. She sang her first Norma in Florence in 1948, and the following year, as a last minute replacement, she appeared as Elvira in Bellini's I puritani in Venice, which was to be her first great success.

In 1949, she married industrialist Giovanni Battista Meneghini who became her manager. She was sometimes known as Maria Meneghini Callas after her marriage.

Shortly after, she made her debut at La Scala in Milan, where the major part of her career and greatest triumphs were to take place. In collaboration with conductors like Carlo Maria Giulini, Leonard Bernstein, Gianandrea Gavazzeni, and directors like Franco Zeffirelli and Luchino Visconti, lavish productions of works such as Cherubini's Medea, Spontini's La Vestale, Bellini's La sonnambula and Norma, Donizetti's Anna Bolena and Poliuto, Verdi's La traviata and Un ballo in maschera, were made especially for her to great acclaim.

She also made guest appearances at the Royal Opera House in London, the Berlin State Opera, the Paris Opéra, the Lyric Chicago Opera, the Dallas Opera and the Metropolitan Opera in New York City.

In 1958, she met Greek shipping magnate Aristotle Onassis which led to her divorce from Meneghini, and slowly began to withdraw from the stage. Her final appearance was in Tosca in London in 1965. She made a last world concert tour in 1973–74 with her often partner tenor Giuseppe Di Stefano, but by then her voice was almost gone.

Callas died of a heart attack in Paris, France, at the age of 53.

All content from Kiddle encyclopedia articles (including the article images and facts) can be freely used under Attribution-ShareAlike license, unless stated otherwise. Cite this article:
Maria Callas Facts for Kids. Kiddle Encyclopedia.